Tense situation in Parliament over a torch 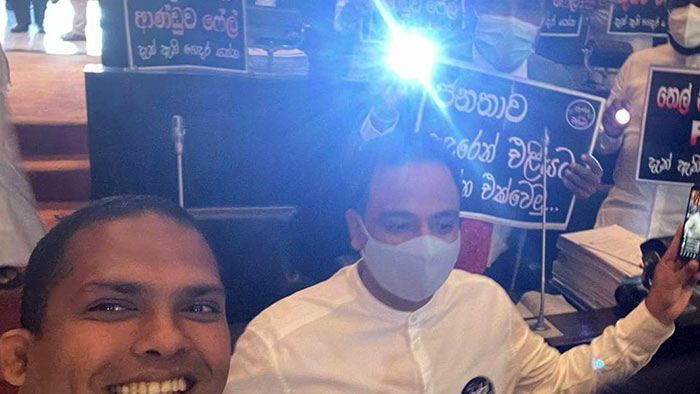 The Parliamentary debate was adjourned for 10 minutes today (February 24) due to MP Harin Fernando’s attempt to convince the Parliament of the impact of power cuts on the public, by bringing a torch to the Parliament.

A heated debate ensued after Minister Dinesh Gunawardena alleged that a parliamentarian of the opposition had brought an unauthorized item into the chamber.

Speaker of Parliament Mahinda Yapa Abeywardena said a decision was reached during a party leaders meeting that no Parliamentarian will be allowed to bring in any unnecessary foreign objects to the Parliament premises.

The Speaker said the Police were directed to intervene and stop such incidents.

MP Harin Fernando said the issue arose when three torches were found in his bag and he brought the torches to be used in the event of a power cut during Parliament sessions.

Later, the parliamentarians of the Samagi Jana Balawegaya staged a protest carrying torches, while taking issue with the ongoing power crisis.

2 Responses to Tense situation in Parliament over a torch

Home » Tense situation in Parliament over a torch