THE CLOCK IS TICKING… WHAT WILL HAPPEN? 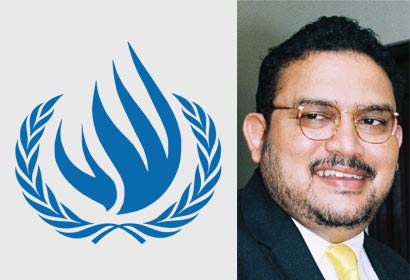 THE CLOCK IS TICKING…WHAT WILL HAPPEN? THE WHOLE GENEVA EXPEDITION SHOULD HAVE BEEN LEFT IN THE HANDS OF DIPLOMATS & PROFESSIONALS.  THEATRICS DON’T WORK IN INTERNATIONAL FORUM.

CONFLICT OF INTERESTS, VESTED INTERESTS AND COMEDY OF ERRORS –THESE TOO WILL BE LESSON LEARNT!

Unnecessary demonstrations, uncouth and indecent remarks about the UN, UNHRC, USA have only had an adverse impact on Sri Lanka. The questionable credibility of those representing Sri Lanka from various countries and from Colombo, their conduct and remarks have not been quite within the norms required of a country like Sri Lanka. It only encouraged the allegations against Sri Lanka. Most of the wrong people were there to ruin the case for Sri Lanka.

Some of the remarks made by irresponsible Ministers in the Government in Colombo expressing their sentiments against the US were childish, immature and silly. Instead of focusing attention on the subject matter and making submissions to the issues in question the adverse comments made against the US, UNHRC and the UN were stunning and shocking. Some of them were tainted with arrogance. It was indeed very unfortunate that there was no supervision or regulatory authority to conduct the affairs for Sri Lanka both here and in Geneva.

Sri Lanka is a democracy and our Politicians should be taught what to say in a collective voice.

It is unfortunate that people like Prof.Christie Weeramantry, Rohitha Bogollagama and the likes were not representing Sri Lanka.

According to him: “The rush in Geneva in terms of bringing Sri Lanka on the agenda is unnecessary. A section of the international community with the US is now trying to pressurize Sri Lanka to implement the LLRC recommendations. Sri Lanka has already clearly shown its competence, capacity and commitment to implement the LLRC recommendations in a comprehensive manner. Putting pressure on the Sri Lankan government to accelerate the implementation of the LLRC recommendations is beyond the mandate of any group or country. Today we have been able to eliminate terrorism in Sri Lanka. Prabhakaran and the LTTE managed to drag on its armed confrontation against the conventional army of the country for 30 years because of the support they received from outside. The LTTE was not confined to Sri Lanka. They had a very well organized, able network which was well financed. Their active armed operations in India was well demonstrated when the LTTE killed former Indian Prime Minister Rajiv Gandhi. Former Sri Lankan President R. Premadasa was killed by the LTTE on the streets. Tamil scholars like Dr. Neelan Thiruchelvam and politicians such as Amirthalingam were murdered by the LTTE.  But in the middle of all these assassinations and violence, the Sri Lankan government continued negotiations with the LTTE which started from Thimpu. It reached Geneva in 2006. A section of the international community backed the LTTE and identified them as a group that had to be dealt with through negotiations. Then Prime Minister Ranil Wickremesinghe entered into a ceasefire agreement with the LTTE. We offered negotiations, peace and ceasefire to the LTTE and in return we received only death and destruction. How did the LTTE manage to go this far, if not for their international network and support system. Though the LTTE is inactive in Sri Lanka in terms of the armed movement, it is alive in the world as strong campaigners against the democratically elected government of Sri Lanka. They keep their front organizations, support groups, the LTTE section of the Tamil Diaspora that has given value to the LTTE development and formed a strong support group with the electoral strengths of some of the Western countries. Some of their groups matter to a lot of politicians in the Western world. We have seen continued targeting of Sri Lanka without leaving room for the Sri Lankan government to implement its own findings and rushing to put Sri Lanka on a multilateral agenda. The danger here is that certain sections of the international community could keep on addressing the Sri Lankan domestic issues through multilateral platforms. That could be a possibility because since we defeated terrorism it did not take long for this to be discussed in the international scene. Now the positive side is that we have always been resilient against pressures and have a very clear cut path to proceed in terms of a domestic process and now our own findings which has been acknowledged by the LLRC should be made a vehicle for political consensus and acceptance. Anything that gets implemented must be sustainable. It should not be just for the sake of implementation and to avoid pressure. This is what President Mahinda Rajapaksa explained. There is no rocket science to find what is just. What is just for the Sri Lankan society should be understood by Sri Lanka. Sri Lankan society is mature enough to carry this through within our framework. The globalized network of operational arms is in line with the R2P doctrine. No matter whether there are INGOs or NGOs, there are people who can be made to act as agents by certain vested groups who have ulterior motives on certain countries. This is a trend that has emerged in the 21st century. Therefore, it is sometimes difficult today with modern technology, such as, the Internet to create public opinion.

A lot of anti-government organizations can benefit from fundamentalist groups who have agendas to serve themselves. So any government in any country must be cautious. Good and responsible mass media can make a significant difference in this regard. Then the people will always stand by the governments than get carried away by the myths fabricated and spread by these organizations. If a country’s imports depend on foreign markets certain dictations find their way into the system. Technology etc. has to be obtained from outside. But the dependence can be minimized if we develop our own resources and if resources are being put to optimum use.We can meet our food demand by developing the agricultural sector. We can develop our milk industry to meet the country’s entire milk requirement. Then we won’t have to send housemaids to other countries and make Sri Lankans work in other countries for money which is virtually living with colonialism. Then we will not be a labour exporting country. When Sri Lanka becomes a destination/hub for health services, logistics, etc. we will need all skilled workers to work here and they will not need to go abroad. The Arab Spring is about countries which had dictatorships. Those countries did not have elections for many decades. Libya did not have elections for 42 years. Yemen did not have elections for 22 years. Leadership was passed on to the son from the father in Syria. Ours is a country with the rule of law and democracy. Elections are held on the due dates at every level. There is no comparison between Sri Lanka and those countries. We have nothing to do with the Arab Spring. There is a very good summer in Sri Lanka in terms of democracy, in terms of the rule of law etc. There is rule of law and equal opportunities for the people in this country, because we countered terrorism. We are only trying to strengthen democracy. President Mahinda Rajapaksa is trying to strengthen the democratic polity of this country, rule of law etc. He is the only strong leader who can do this on behalf of all Sri Lankans and achieve all our goals. This is because he has the support of the South and the North, and every other section in the country.The President has already proved that he can deliver by completing the humanitarian operation and bringing normalcy to the lives of all Sri Lankans. He eliminated terrorism and created a just and safe society in this country for all ethnicities. This is what the world should acknowledge. We have to take this message to the targeted sections in the world in the strongest way possible. I think the public should be conscious about international pressure because once a country is put on an international agenda, the citizens’ space to enjoy liberty and sovereignty is compromised. Therefore, the people of Sri Lanka must rally round the government, who is the custodian of the people, to avoid such developments finding their way into international platforms against the interests of the country.”

Let us hope for the Best. It is time that representatives of the people are kept under check and the Rule of Law prevails and no one is above the Law and Justice must not only be done but seen to be done.

4 Responses to THE CLOCK IS TICKING… WHAT WILL HAPPEN?

Home » THE CLOCK IS TICKING… WHAT WILL HAPPEN?