“ Slaughter every man, woman, and child (including babes suckling at the breast)” were the orders given by Governor Robert Brownrigg (3rd British Governor of Ceylon from 1813 – 1820) to Maj. Gen. Hay MacDowell in 1818 that left the people in the agriculturally rich grain growing region of Uva-Wellassa of then Ceylon in a state of famine and starvation. Uva – Wellassa region was the granary of the Kingdom of Kandy before it was annexed by the British in 1815 under an Agreement now known as the ‘Kandyan Convention’ entered into with the Traditional Chiefs of the Kandyan Kingdom. No sooner was the ink made dry after the signing of this Treaty that the British Colonial Govt. began to dishonor this Agreement in both spirit and substance that it led to a popular uprising of the people led by the Kandyan Chiefs in 1818 that nearly brought the collapse of the British Colonial Government in Ceylon. 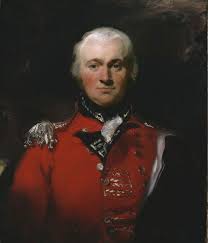 The British used a scorched earth policy including mass murder and genocide of innocent Sinhala civilians to crush this rebellion. A scorched earth policy is a military strategy which involves destroying anything that might be useful to the enemy while advancing through or withdrawing from an area. It is a military strategy where all of the assets that are used or can be used by the enemy are targeted, such as food sources, transportation, communications, industrial resources, and even the people in the area.

Robert Brownrigg arrived in then Ceylon at the age of 53 to take over as Governor of Ceylon from Maitland his predecessor. Brownrigg had no experience of civil administration, no previous contact with oriental people when he arrived in 1812. These shortcomings did not affect colonial rule largely on account of John D’Oyly who had mastered the Sinhalese language and who corresponded with the Kandyan chiefs.

Kandy was occupied by February 14th, 1815 using only 3744 British troops. The King of Kandy Sri Wikrama Rajasinha was taken prisoner on 18th February at Gallehewatte in Dumbara and deported to Vellore, South India and he died in 1832 while his only son born in exile died in 1843. That Sri Lanka was not conquered is proved in the Act of Settlement read at the Convention on 2nd March 1815 stipulating the conditions under which the British Crown would administer the annexed Kingdom. The ceding of Kandy ended Sinhalese independence of 2357 years.

In recognition of his ‘achievement’ of helping Britain to annex the Kandyan Kingdom, Brownrigg was made a Baron in 1816. D’Oyly was rewarded making him a Resident of Kandy.

The genocide committed by the British to quell the uprisings between 1818 and 1822 by slaughtering every man, woman and child including babies suckling at the breast in the Uva Province (Badulla and Moneragala districts) goes down as notable examples of British crimes against humanity. Uva occupies a prominent place in Sri Lanka’s history for the first recorded visit of Lord Buddha to Sri Lanka was to Mahiyangana, south of Uva.

British human rights campaigners now pointing accusing fingers at Sri Lanka have forgotten the Madulla Massacre that led to razing and annihilating entire villages. In the entire Uva region members of the male population above the age of 18 were killed in revenge for resisting British imperial occupation under Governor Brownrigg. No paddy or chena cultivation could be done for 10 years due to lack of man power.  Davy’s records reveal that during an inspection of the Uva region with Governor Brownrigg they had not seen a single person or house for 7 days.

The Britain that today preaches human rights and demands accountability and upholding of universally accepted standards on human rights needs to recall some of the orders given by men Britain knighted in recognition of their services to Her Majesty the Queen during Imperial colonial rule.

The British that is now demanding demilitarization in Sri Lanka may like to note that the auxiliary force that was brought as reinforcements from India in 1818 only left Ceylon in 1920 – after 102 years and we wonder how many women were raped and were left with child!!! 10,000 Sinhalese Buddhists are said to have been killed in battle.

The people of Uva were very proud people as they had also fought against the Portuguese and the Dutch.

The entry of Herbert White, a British Government Agent in the (Compendium of Uva) Journal reads as follows “there is no record of the population of Uva after the rebellion. No record is left about Uva before the rebellion. If thousands died in the battle field they were all brave fighters. If 4/5 of the remaining population after the rebellion is considered as children and the old, the damage done is unlimited’.

British human rights champions have conveniently avoided acknowledging how their troops killed all cattle, animals, burnt homes, property, burnt their grain, cut down their coconut, jak and breadfruit trees, agricultural crops and fields and even salt that the people possessed? Simply to say neither UN nor the Human Rights Council existed at the time is simply not enough. The Statute of Limitations does not apply to Crimes against Humanity. WE DEMAND BRITAIN COME CLEAN ON ITS CRIMES IN ALL OF THE COLONIES.

British human rights preaching in modern context omit how the irrigation systems of the duchies of Uva and Wellassa the rice-bowl of Sri Lanka were systematically destroyed under British Government orders. Wellassa which means ‘WelLakshsa’ – Lakh of paddy fields, was brought to ruins by the British.

The British who preach now about honoring commitments made may like to ask how they betrayed the core terms of the Kandyan Convention in particular the assurance given to protect Buddhism as state religion (Article 5 of the Convention which refers to the inviolability of the Buddhist religion). Unfortunately, every post-independent leader continues to break this key commitment.

Governor Robert Brownrigg who issued the gazette notification on 1 January 1818 condemned all 17 who rebelled against the British, termed them ‘traitors’, confiscated their properties by Government declaration. They were declared ‘Rebels, Outlaws and Enemies of the British’. It took over 180 years for the Sri Lankan Government recognize them as ‘National Heroes’ and behoves the Government to declare an official memorial for them.

The people of Sri Lanka need to know who their true heroes are:

4. MahaBetmerala of Kataragama in Ouva

5. KudaBetmerala of Kataragama in Ouva

The British that now claim to stand for righteousness and seek the high moral ground wherever possible need to be reminded how they treated Madugalle UdaBagada Nilame who was dismissed from office, arrested without been given the opportunity to bid farewell to his family (what today resembles extraordinary renditions), his residence was publicly burnt on Governor Brownrigg’s orders, possessions confiscated and sold with proceeds going to a British pension fund.

What must also be mentioned here is that the British army in Ceylon comprised Europeans, Javanese, Malay, African troops, Indian sepoys and Sinhalese Lascorins. The 1818 rebellion was crushed by bringing Indian Tamils (Sepoys) from the Madras Presidency (Tamil Nadu).

Other cruel British officers who served in Ceylon were Lieut. J. MaClaine of the 73rd regiment (he enjoyed having breakfast while viewing Sinhalese being hanged), Lieut. Col. Hook was ready to hang any officer whom he suspected to be a rebel or collaborator.

The strategy of destroying the food supply of the civilian population in an area of conflict has been banned under Article 54 of Protocol I of the 1977 Geneva Convention. The relevant passage says:

“It is prohibited to attack, destroy, remove, or render useless objects indispensable to the survival of the civilian population, such as foodstuffs, agricultural areas for the production of foodstuffs, crops, livestock, drinking water installations and supplies, and irrigation works, for the specific purpose of denying them for their sustenance value to the civilian population or to the adverse Party, whatever the motive, whether in order to starve out civilians, to cause them to move away, or for any other motive”.

British Scorched Earth tactics and crimes against humanity in other wars

British Lord Kitchener used scorched earth policy during the latter part of the Second Boer War (1899–1902) when the Boers not conforming to classic military defeat when their two capital cities were captured, but never on the battlefield, adopted the first modern form of what we know today as guerrilla warfare, in order to rid their republics of the British. In response the British ordered destruction of the farms and the homes of South African civilians in order to prevent the still resisting Boers from obtaining food and supplies. An eloquent description of this comes from an Army officer at the time (Phillips, Lisle March (1901) With Rimington in the Boer War. London: Edward Arnold). This destruction left innocent women and children without means to survive since crops and livestock were also destroyed.

It was the British and not the Germans who first established large scale Concentration Camps. The existence of British  run concentration camps was exposed by Emily Hobhouse who toured the camps and began petitioning the British government to change its policy. In an attempt to counter Hobhouse’s activism, the British commissioned the Fawcett Commission, that confirmed Hobhouse’s findings. Negligence by the British, lack of planning and supplies and overcrowding led to much loss of life. A decade after the Boer war P.L.A. Goldman officially determined that an astonishing number of 27,927 Boers died in the concentration camps: 26,251 women and children (of whom more than 22,000 were under the age of 16), and 1,676 men over the age of 16, of whom 1,421 were aged persons.

Boer civilians watching British soldiers blow up their house with dynamite: Boers were given 10 minutes to gather belongings

The British Governments throughout its infamous colonial history had always applied double standards. The duplicity of the British Government in calling for accountability in Sri Lanka is best illustrated by its own handling of the ‘Chilcot Inquiry’ which investigated the conduct of the UK government and military in relation to the invasion of Iraq. This inquiry ran from November 2009 until February 2011 and it cost approximately £7.5 million, but its Report is not yet made public for fear of the huge embarrassment it would cause to both the British Government and British military once its contents are released. What is Britain now preaching against Sri Lanka with blood on its hands?

Irrespective of the outcome of the vote at UNHRC in Geneva, the Government of Sri Lanka must no longer hesitate to immediately appoint a fully fledged Commission of Inquiry to investigate British crimes in Ceylon during the colonial period (1796 – 1948), seek evidence from the public and then once the findings are announced and if they are revealing of British crimes against humanity, take approximate steps to seek reparations from the Government of Britain for the damage and destruction caused to Sri Lanka together with an unconditional apology and penance that are long overdue.

Robert Brownrigg must be condemned for his crimes in Ceylon even at this late stage because that is a historic duty that posterity owes to our freedom fighters and national heroes who sacrificed their lives and liberty in the Uva – Wellassa based war of independence in 1818.