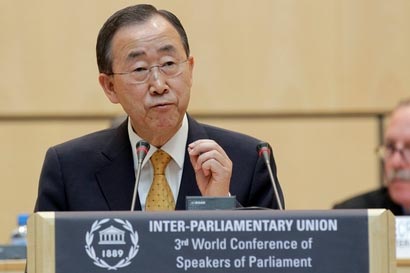 The US Assistant Secretary of State for South and Central Asian Affairs, Robert Blake, during his recent visit to Sri Lanka stated: “The US believes the UN panel can play an important advisory role with Sri Lanka’s commission. The panel is only an advisory panel and does not have an investigative role”(Daily Mirror online, July 22, 2010). According to the UN Secretary General (SG) the particular nature and scope of this advice is expected to be is to establish “standards, benchmarks and parameters, based on international experience, that must guide any accountability process” (UN News Letter, March 16, 2010).

Only those internal conflicts that could be categorized as “armed conflicts” within the territory of a state have established norms. The applicable guidelines governing such conflicts are embodied in Additional Protocol II of 1977. All other conflicts such as insurgencies do not have established guidelines. The conflict in Sri Lanka, as well as a majority of the conflicts throughout the world do not have established guidelines because they are not recognized as armed conflicts. Hence the need for the SG to set up a panel to establish “standards, benchmarks and parameters” with which to “guide the accountability process” relating to the final stages of the conflict in Sri Lanka. Consequently, what the SG has embarked upon is a pioneering exercise.

This is the case with the conflict in Afghanistan too. This conflict has been categorized as an insurgency – not as an armed conflict. Consequently, established norms to judge the conduct of the insurgents or of the NATO forces do not exist. However, one could be certain that no accountability process would be initiated concerning the violations currently taking place where civilians are being put in harms way regularly, or would ever be undertaken, because of NATO’s involvement in the conflict. If at all any accountability processes are undertaken they would be internal. No attempt would be made by the UN or any other international body to set up guidelines to assess humanitarian and/or human rights violations in these theaters of conflict. Whether such internal inquiries are judged on the basis of “international experiences” would not be open to scrutiny.

Perhaps the SG has initiated an inquiry because of pressures brought on by interested parties who believe that any internal inquiry would not be impartial and objective. The lack of confidence in internal inquiries is not based on facts but more on impressions to further their vested interests; a consequence of “implicit bias”. For instance, the UN’s estimated number of deaths during the final stages of the conflict in Sri Lanka was 7000. The Times of London later made out this number to be 20,000, while groups such as International Crisis Group upped this figure to 30,000 with others more recently claiming it to be as much as 40,000. Considering the physical impossibility of identifying civilians from former combatants, if evidence gathered by the Commission appointed by the Sri Lankan Government were to arrive at a figure closer to the original 7000 of the UN, charges of a cover-up would be inevitable. While the tendency may be to doubt the objectivity of government appointed Commissions it has to be granted that the public does not have access to information that is normally available to a Commission of inquiry. Therefore, while those who would gain by exaggerating the number of casualties would be disappointed, to yield to their claims for an inquiry by the UN would be to violate the obligation not to intervene in domestic affairs as called for by the UN Charter.

If the UN SG is permitted to arbitrarily take action with regard to internal affairs of member states without the approval of the Security Council or the General Assembly, it would create a precedent where individual states would be singled out for assessment of violations based on variable norms established arbitrarily by “expert panels” on a selective basis. This would be largely propelled by the national and geo-strategic interests of the big powers, and would amount to intervention in domestic affairs of states; a protection that each member state of the UN is entitled to. Therefore, it is in the interests of the less powerful states to band together to prevent their sovereignty being violated on grounds of the inviolability of the right of self-determination in such an arbitrary manner.

The initial step towards such a goal is for member states of the Non-Aligned Movement (NAM) and Association of South East Asian Nations (ASEAN) to oppose the concept of the UN setting up separate advisory panels to assess humanitarian and/or human rights violations for each theater of conflict. Instead, what they should collectively advocate is for the UN to institute procedures and arrangements for developing guidelines similar to Additional Protocol II of 1977 but specifically designed to guide internal conflicts outside the scope of armed conflicts since such guidelines do not exist at this point in time. It is in the collective interests of the less powerful states to prevent conflict related activities within their territories from being judged by arbitrary standards tailor made to fit personalized agendas. NAM and ASEAN would be entitled to initiate such a course of action because the Charters of both organizations call for non-intervention in the domestic affairs of their members.

A compelling reason for such a collective undertaking would be that no accountability process would be initiated for the actions of the major powers regarding their actions in conflict situations. The only protection for the less powerful is to collectively prevent the SG from being made a tool of the big powers to carry out their directives. Since the less powerful have the strength of numbers for such collective action they should take steps to initiate such a process if they are to retain a semblance of dignity for the people they represent.

The theme for collective action should be non-intervention in matters which are essentially within the domestic jurisdiction of any state. The two relevant clauses in Article 2 of the UN Charter are 7 and 4.

Article 2 (7) of the UN Charter states: ” Nothing contained in the present Charter shall authorize the United Nations to intervene in matters which are essentially within the domestic jurisdiction of any state or shall require the Members to submit such matters to settlement under the present Charter; but this principle shall not prejudice the application of enforcement measures under Chapter VII” and Article 2 (4) states: “All Members shall refrain in their international relations from the threat or use of force against the territorial integrity or political independence of any state, or in any other manner inconsistent with the Purposes of the United Nations”. Inspired by the sentiments contained in the UN Charter the Charters of the Non-Aligned Movement and the Association of South East Asian Nations also express the need to “Abstain from intervention or interference in the internal affairs of another state”.

The appeal in Article 2 (4) of the UN Charter for states to refrain from intervening in the “political independence …or in any other manner inconsistent with the purposes of the United Nations” should be compelling enough for the SG to desist from dictating in the form of “advice” how a member state should carry out an inquiry pertaining to activities within its territory as in the case of Sri Lanka. Despite it sounding innocent such “advice” could have serious implications. Therefore, if fellow member states do not act in concert to prevent such interference by the SG in violation of the UN Charter there would come a day when they too would be subject to similar interference in their domestic affairs.

Such interventions are unacceptable because of the arbitrariness and selectivity of the standards applied in the absence of acknowledged “international experiences”, as in the case of Sri Lanka. On the other hand, if grounds for intervention are universally accepted as with the Geneva Conventions and the Additional Protocols, assessing accountability would be justified. It is only then that the accountability process would have legitimacy.

Internationally accepted guidelines for non-international armed conflicts are contained in Additional Protocol II of 1977. Work on this Protocol started in 1965 and was only concluded by a series of Diplomatic Conferences from 1974 to 1977, i.e., it took 12 years. As with the conflict in Sri Lanka, the majority of conflicts in the world are NOT categorized as non-international armed conflicts. Guidelines for such conflicts do not exist. Considering the complexity of today’s conflicts, the task of developing appropriate guidelines to cover internal conflicts OUTSIDE the scope of non-international armed conflicts needs to go beyond the depth and substance of Protocol II with a focus on the safety of civilians trapped in these conflicts. This is daunting task that is well beyond the capability and capacity of the 3 experts appointed by the SG, to accomplish within a 4 month time frame. The SG’s action reflects a failure to grasp the seriousness of the complexities of what is involved. This lack of appreciation causes the SG’s initiative to be a distraction from the work of the Commission appointed by the Sri Lankan Government.

One key right enshrined in the instruments of the UN is the right of self-determination. By appointing an advisory panel to set the norms by which the accountability process of the Sri Lankan Commission would be judged, the SG has violated Sri Lanka’s right to determine what such norms should be, unfettered by externally set “standards, benchmarks and parameters”. It is when intervention is arbitrary and selective that it becomes unacceptable. Intervention becomes acceptable when the criteria for intervention are universally acceptable as with Additional Protocol II of 1977. Therefore there is an obligation for the International Community to develop universally acceptable standards against which future non-international conflicts outside the scope of non-international armed conflicts are made accountable. In the current context it is appropriate that Sri Lanka leads the collective effort with the support of NAM and ASEAN to promote the need for the body of nations under the umbrella of the UN to participate in a global endeavour to develop universal standards to meet the challenges from today’s conflicts the majority of which fall outside the sphere of armed conflicts.