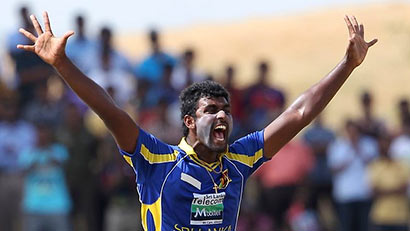 Sri Lankan all-rounder Thisara Perera has been prevented from playing in the ongoing Big Bash League (BBL) in Australia by the island’s cricket board, a Sri Lankan newspaper reported on Thursday.

Perera, according to the report, was not permitted to play in the BBL because he had failed “to perform up to expectations against Pakistan.”

He has instead been instructed to remain in Sri Lanka for the upcoming series against England A.

Sri Lankan newspaper the Daily Mirror reported that Sanath Jayasuriya, who is now the chief selector, had “objected” to providing Perera clearance.

“At a meeting Perera had with SLC officials, Jayasuriya had reportedly warned Perera severely to work on his bowling,” the report added.

“Jayasuriya had felt that taking instructions from national bowling coach Chaminda Vaas and then taking different instruction from the other SLC coaches has left Perera confused and at the mercy of international batsmen.”

Perera was not available for comment at the time of writing.

In a statement, SLC said that Perera will now “spend maximum time with the local coaching staff and attend training alongside the Sri Lankan A team.”

Perera also plays for the Indian Premier League team Sunrisers Hyderabad, but SLC are unlikely to prevent him from taking part in the IPL, as the board gains substantially from players’ IPL earnings.

Ajantha Mendis, Lasith Malinga, Tillakaratne Dilshan and Muttiah Muralitharan are the other Sri Lankan players who have been signed by BBL teams.