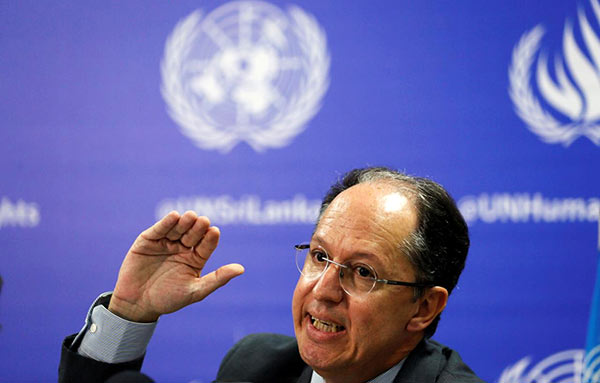 Long delays in Sri Lanka’s post-war reconciliation is not without cost, and its government should implement measures to resolve outstanding issues, the United Nations said on Monday.

President Maithripala Sirisena’s government in 2015 agreed with the U.N. to investigate alleged war crimes in the final phase of a 26-year civil war. It then requested a two-year extension to fulfill that commitment.

Both sides in the conflict – the government military and the separatist Liberation Tigers of Tamil Eelam – were equally responsible for war crimes, according to the U.N.

The government has agreed to establish a special court to investigate the alleged crimes and return land occupied by the military in the north.

However, much of the process has been delayed by the government amid worries it will lose popularity among Sinhala Buddhists, Sri Lanka’s majority community, analysts say.

After a two-week fact-finding mission, U.N. special rapporteur Pablo de Greiff said such delays raise questions about the determination of the government to undertake a comprehensive transitional justice program.

“Long delays between the acknowledgment of obligations to establish transitional justice measures and the fulfillment of these involves risks: no one should be under the impression that waiting is a costless alternative,” he told reporters in Colombo after concluding his mission.

He also said the process has been increasingly ethnicized.

”As a result, transitional justice is represented as if it were essentially a threat to the majority community, of interest to one of the minorities only – and all others left at the margins,” he said.

Many Sri Lankans oppose foreign involvement, and supporters of former president Mahinda Rajapaksa believe the U.N. resolution on the need to investigate war crimes aims to punish the military unfairly.

The international community has urged a judicial process to hold out a realistic prospect of punishment for senior figures in Rajapaksa’s government and military, as well as Tamil Tiger rebels, who waged a bitter final battle in which the U.N. has said up to 40,000 people were killed.