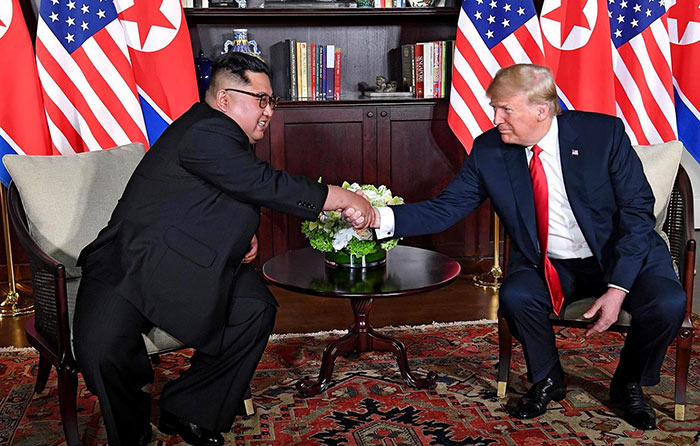 After briefly shaking hands and taking a photo side-by-side, the two leaders moved into another room where they sat in chairs and made brief statements for the press.

“We’re about to have a great discussion,” Trump said, adding that he expects a “tremendous success.”

“We will have a terrific relationship — I have no doubt,” the president added.

For his part, the North Korean leader said, “It was not easy to get here … the old prejudices and practices work as obstacles on our way forward, but we overcame all of them and we are here today,” according to a translation.

Following those comments, the two leaders began what was said to be a one-on-one meeting with only translators in attendance. They then made a brief appearance together at a balcony exposed to cameras, and then headed into a larger bilateral meeting.

From that expanded meeting, with delegation members on opposing sides of the table, Trump delivered another message to Kim.

“Mr. Chairman, it’s a great honor to be with you, and I know we’ll have tremendous success together and we’ll solve a big problem — a big dilemma — that until this point has been unable to be solved, and working together we’ll get it taken care of,” Trump said before reaching for another handshake with his North Korean counterpart.

After hearing Kim’s response, Trump added: “We will solve it, we will be successful, and I look forward to working on it with you. It will be done.”

It was the first time that sitting leaders of both countries had met, and it came after years of bluster and threats from Pyongyang that have raised concerns about the rogue regime launching a nuclear strike.

The U.S. side has said it is resolute in its goal for Tuesday’s summit: North Korea’s total and verifiable denuclearization. American officials have dangled the relief of stringent international sanctions or even economic aid if the hermit regime were to acquiesce.

North Korea, on the other hand, is understood to want guarantees about the future of its autocratic regime and the security of its borders.

Washington is hoping the bilateral discussions will be the first of many with Kim’s government, eventually leading to the country surrendering its nuclear capabilities. That weapons program has become a threat to neighbors such as Seoul and Tokyo — and even for the U.S. mainland.

For decades, Pyongyang has sought to depict the world’s largest economy as an imperialist aggressor for its role in the Korean War while simultaneously blaming Washington for North Korea’s dire economic situation that’s been exacerbated by international sanctions.

The isolated country has long said it’s justified in seeking nukes in light of the “extreme and direct nuclear threat” from the U.S., which it accuses of pushing for regime change.

Regardless of result, Tuesday’s meeting is considered a diplomatic breakthrough given that history. Still, many experts have said the summit is a mistake on Washington’s part since it legitimatizes Kim’s regime and places him as an equal to Trump.

Experts predict little in terms of concrete results from the summit. In the past, Pyongyang has said it may denuclearize only if certain conditions are fulfilled. Those include terminating America’s military presence in South Korea as well as ending the U.S. regional nuclear umbrella, a security arrangement in which Washington promises in-kind retaliation on behalf of close allies if they are attacked with nuclear weapons.

Washington has said its troops in South Korea would not be up for discussion during the Tuesday summit. Such a withdrawal could have major implications for Asia, but so too could a failure to reach any deal between the two parties.

Some experts have said, however, that there are also risks that could arise from a tentative deal.

“The greatest risk is if we get a political agreement at this summit and the optics look nice but then it falls apart on the details — maybe not in six months, maybe not in one year but in five years,” Michael Kovrig, senior advisor at the International Crisis Group, told CNBC on Monday.

“That’s why we need a clear, step-by-step process that goes action-for-action [and] creates a security environment where the North Koreans are actually willing to take steps and the United States is in a position to monitor and verify those steps.”

Even if the North Koreans come out of the summit saying they are committed to denuclearization, that hardly guarantees anything. The regime has made commitments before, and monitoring compliance to an agreement would likely present a challenge.