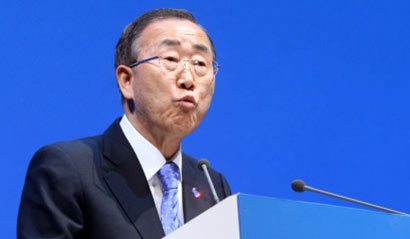 South Korea voted against Sri Lanka on March 27 at the UN Human Rights Council (UNHRC) in Geneva in support of a US Resolution calling for an international inquiry to be undertaken by the Office of the High Commissioner on alleged Human Rights violations by Sri Lanka. In taking this path South Korea showed itself as the ONLY Asian nation to have aligned with the Christian West bloc of nations alongside nations scared of the West, to vote against Sri Lanka. All other Asian countries either voted against the Resolution e.g. China, Pakistan, Vietnam, Maldives, Saudi Arabia, UAE or abstained e.g. India, Indonesia, Japan, Kazakhstan, Kuwait, Philippines.

This is the second time that South Korea has voted against Sri Lanka at UNHRC having done so on a similar Resolution last year (2013) proposed by USA and the EU block of nations.  Sri Lanka if it is to retain its dignity and self – respect particularly in the Asian community must now undertake a critical assessment to determine who its true friends and ‘cosmetic’ friends are in the international arena.

It follows that the Govt. of Sri Lanka should no longer give the red carpet to the countries that voted for the US Resolution and against Sri Lanka. Other Asian countries e.g. Japan, Philippines, Indonesia etc. too have strong ties with USA but they also value their ties to a fellow Asian nation through religious, cultural and historical bonds. South Korea took a unilateral stand disregarding these ties to Sri Lanka.

Is South Korea functioning as a surrogate of the Christian West in Asia?

South Korea is promoting an International Conference of Asian Political Parties (ICAPP) Sept. 18- 21, 2014, to be held in Colombo with Sri Lanka playing host. The main theme of the conference is “Building an Asian Community.”    Both the Govt. and people of Sri Lanka have every right to ask South Korea whether an Asian Community could be truly established in situations where one Asian country stabs another Asian country in the back by joining hands with European nations which always vote as one block in International fora. South Korea has a lot of explaining to do if it wants Sri Lanka to look at South Korea as a true friend. No amount of money can compensate for betrayal of friendship.

In the meantime Sri Lanka has a duty by its people and particularly the Ranavirus (gallant soldiers) who won the war for Sri Lanka against a cruel enemy by sacrificing 27, 000 of Ranaviru lives to take tough decisions even in the international arena. Sri Lanka must seriously consider hosting this  International Conference of Asian Political Parties (ICAPP) in Colombo in September 2014 sponsored by South Korea. Its Asian credentials and commitment towards building a truly Asian Community are now suspect. Is South Korea functioning as a surrogate of the Christian West like so many NGOs who rely on financial assistance from the West for their political and economic survival while doing the bidding of the West in de-stabilising Asian countries?

In 2005, according to figures compiled by the South Korean National Statistical Office, 46.5% of the population were classified as Irreligious, compared to 22.8% Buddhists, 18.3% Protestants, 10.9% Catholics, and 1.7% Other religions. The Catholic Church has increased its membership by 70% in the last ten years.

Today South Korea had the third highest percentage of Christians in East Asia or Southeast Asia, following the Philippines and East Timor.

It is indeed strange that with the UN and the UNHRC head Navi Pillai in particular drawing references to religious intolerance why they have been stoic silent on the unprecedented violent attacks upon Buddhist places of worship.

The Resolution against Sri Lanka drawn from the report by Navi Pillai expresses alarm at the rapid rise in violence and discrimination on the basis of religion or belief, particularly against members of religious minority groups. The Resolution urges the Government of Sri Lanka to investigate all attacks, by individuals and groups on all religious places of worship, hold the perpetrators responsible and prevent future such attacks.

The below examples of religious intolerance in South Korea happened and is happening for decades. South Korea is the home of the UN Secretary General himself, yet the emphasis against Sri Lanka with hardly 20 cases of violence in 5 years which themselves are questionable against Buddhist temples scorched and destroyed completely in South Korea only serves to raise the question of double standards at play. This is reiterated further in Navi Pillai’s silence over 700 mosque attacks in the UK.

In 2008, when 200,000 Buddhist monks and lay people rallied in Seoul, South Korea protesting against religious bias and constitutional infringement by the Lee Myung-bak administration not a hum came from Navi Pillai or the entities lining up to accuse Sri Lanka of religious intolerance. Of particular note was after Lee Myung-bak‘s ascendence to the Presidency when the high proportion of Christians in relation to Buddhists in the public sector became known–particularly the President’s cabinet, where there were 12 Christians to only one Buddhist. 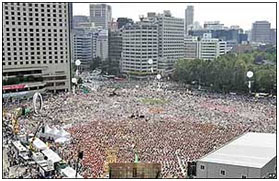 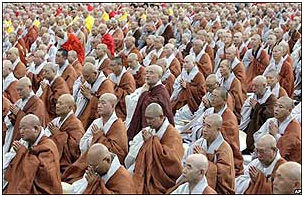 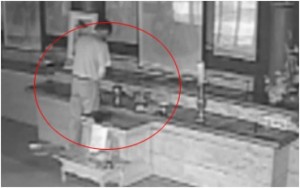 They seek to destroy us

The example of religious intolerance is just one of the additional items included into the 3rd Resolution at UNHRC not included in the initial. A host of other additional items under human rights which attempts to mix humanitarian laws with human rights needs to get the attention of the global community to realize that a neocolonial agenda is now at play and when US and EU vote en masse the likelihood of fair play prevailing is bleak. In South Korea, the systematic destruction of the Buddhist heritage and Buddhist identity of South Korea has not got a single protest from the UN and its associated entities and it goes to show the lies and hypocrisies that prevail.

The example of growing religious intolerance against Buddhism in the very country that Ban Ki Moon comes from goes to show the shocking truth of using issues to the advantage of agendas by UN officials who are simply puppets and ever ready to do as the Christian West bids them to do.

It is now time that the rest of the world became aligned to build a formidable force against the new racial and religious imperialism emanating from the West.