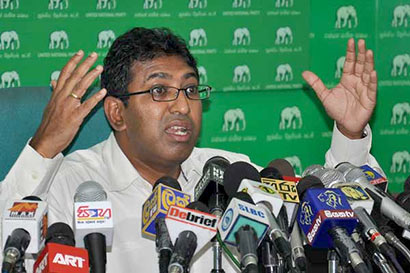 MP Silva said: “How can one go that low. As a Sri Lankan I am ashamed to see people are being fooled and treated like a bunch of idiots.”

The president should have asked Sri Lankan artistes like Amaradeva, Malini Fonseka to help him with electioneering without disgracing Sri Lanka as a nation.

Meanwhile, Common Candidate’s Media Unit yesterday said that a number of artistes, including Samanali Fonseka and Indrachapa Liyanage had been attacked yesterday in Kurunegala.

They were attacked by a mob numbering about 150 when they spoke about the irregularities of the government following a musical show at Kumukgette, Kurunegala.