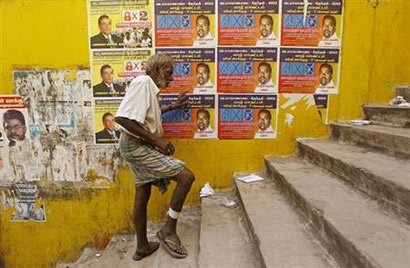 (Reuters) – Voters in northern Sri Lanka go to the polls on Saturday in a provincial election that threatens to stir up old animosity between the government and ethnic minority Tamils.

Defeat for the government of President Mahinda Rajapaksa would be largely symbolic, but victory for the main Tamil party could reignite calls for autonomy.

Northern Sri Lanka was the heartland of a Tamil Tiger separatist movement that battled the central government from 1983 until the rebels’ crushing defeat in 2009.

Most voters in the north are ethnic Tamils and many of them are bitter about what they see as virtual occupation of the region by the army which they accuse of rights abuses in the final, bloody stages of the war.

They are expected to vote overwhelmingly for the Tamil National Alliance (TNA), the former political proxy of the now defeated rebels, in the vote for 38 provincial councillors.

The party’s chief candidate, C.V. Wigneswaran, said getting the army out of the north would be his first priority.

“The army is the real problem,” said Wigneswaran, 74, a former judge, sitting outside his party’s election office.

“If you take away the army … our people will be freed of the intrusions and interference in their day-to-day life. We will not be subject to unnecessary harassment.”

Rajapaksa and his government have come under international pressure to bring to book those accused of war crimes committed at the end of the war and to boost efforts on reconciliation in the polarised country.

The government has rejected accusations of rights abuses and Rajapaksa in July ordered an inquiry into mass disappearances, mostly of Tamils, at the end of the war.

The chief candidate for Rajapaksa’s ruling party, Sinnathurai Thavarajah, said the TNA was misleading voters with talk of getting the army out, which had nothing to do with a provincial council.

“Already, they have reduced the military occupancy to 24 square km this year from 64 square km in 2010. A provincial council has no right to decide on military movement,” he said.

Rajapaksa has a more than two-thirds majority in parliament and controls all other eight provinces. He appears determined to win in the north where campaign posters for the ruling coalition are plastered over walls.

But victory seems a long shot.

Many people in Jaffna told Reuters they would vote for the TNA. Many others said they were not ready to talk or give their names as the feared reprisals by military.

“They will talk freely only if the military is sent out of the province,” S. Kumar, a 43-year-old father of two told Reuters. “I think Tamils need a separate independent state.”

Savarimuththu Rajeshwari, 63, said she would travel more than 30 km (20 miles) to vote for one reason: “We need our land back.

“We have suffered a lot” said Rajeshwari, who said she had been forced to move off her land during the war. “My house has been demolished. But if the government could return my land, that would be the greatest relief in my life.” (Reuters)