What are the rights Constitutionally & Legally denied to Tamils in Sri Lanka? 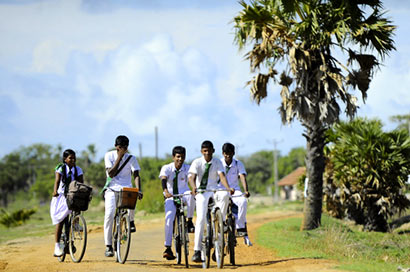 Mr. Venkaiah Naidu, BJP Union Minister for Urban Development and Parliamentary Affairs has declared that Sri Lanka should give equal rights to Tamils. Does this imply that Tamils do not enjoy equal rights, or perhaps that is the perception? If Sri Lanka’s closest neighbour thinks Tamils do not enjoy equal rights we can’t blame others for the same perceptions. The statement does mean that Sri Lanka has failed to project what Tamils and minorities actually enjoy in Sri Lanka. Sri Lanka has also failed to statistically show that in many ways the minorities are economically and socially placed above the majority Sinhalese Buddhists of Sri Lanka.

Those that are under the impression that Tamils do not enjoy rights constitutionally and legally need to first look at the Constitution which clearly sets out fundamental rights. There is no word in the constitution that denies Tamils or minorities equal rights.

The foremost place afforded to Buddhism cannot be challenged because Buddhism was the state religion chosen by royalty and that status changed only upon colonial invasion and occupation though the colonial invaders assured that they would not depose the place afforded to Buddhism in Sri Lanka passed down from King to the next (a promise the British didn’t mean to keep, but nevertheless is important on the context of the historical status that Buddhism held and should continue to hold).

In a population of 20m there are less than 2.2m Tamils and less than 1.6m Muslims in Sri Lanka as against 14.8m Sinhalese. Those that place their arguments must realize that 7 out of 10 in Sri Lanka are Sinhalese, the country has been ruled by over 180 Sinhala Buddhist kings that status only changed because Sri Lanka was taken over. Those that invaded and occupied Sri Lanka brought workers from Tamil Nadu and before independence these Tamils numbered more than the Tamils that had settled down following various South Indian invasions throughout history. This was one ground that these settled immigrant Tamil politicians desired the Tamil Nadu labor Tamils to be sent back and the pacts signed between Indian and Sri Lankan leaders gave the choice of remaining in Sri Lanka or returning to India.

In responding to the question of rights the world needs to look from the lens of what people currently enjoy and not what Tamil politicians are demanding for themselves.

Let us therefore stick the most basic of questions

Very few speak about reversing the discrimination not looking at what the Sinhalese had been denied right through invasion and occupation and thereafter when colonial sub-servients were created to take reigns and little have post-independence leaders done to undo the injustices meted out to the Sinhalese when even by 1956 (8 years after independence) Tamils held over 75% jobs in the public service.

With the BJP Union Minister demanding equal rights for Tamils, it is good to ask what place India gives to Tamil Nadu Tamils when out of the 74million Tamils in the world 67million Tamils live in Tamil Nadu?

Give us an example where when 7 out of 10 people belong to one race/ethnicity and religion what other country has given just 1% equal language status as Sri Lanka has done? Rightly, there should be only one national language and English as the link language. If Sinhalese is the official national language it means that every citizen must know Sinhalese. Do not Tamils have to learn German to live in Germany, French to live in France and Japanese to live in Japan? One language and English bridges people. Two languages are dividing people

Sri Lanka has a separate color to depict Tamils and Muslims in the country’s national flag – has India shown such a gesture when it has 9/10 of the world’s Tamils in India?

Let us also remind India that in Tamil Nadu – close to 20% of its population are Dalits and 80% of this number live in villages where illiteracy is over 60%. 62% of these Dalits suffer from some type of abuse ranging from physical assault, sexual harassment, verbal abuse to even rape. This is how Tamils appear to be treating their own in India where the Indian Government is telling Sri Lanka to treat Tamils with “dignity and respect”.

Let us remind India that even in the Madras High Court, the language of the court is NOT Tamil but Hindi!

Therefore, it is advisable for people to accuse after having investigated for themselves whether Tamils have any rights denied to them which ONLY Sinhalese enjoy. To claim that a right is denied they first have to prove that the Sinhalese are enjoying what Tamils are denied to enjoy constitutionally, legally and legislatively. So far every time Tamil politicians begin their mourning about rights being denied when they are asked to name them they are unable to do so. Let it also be reminded that those that believe the TNA need to realize that the TNA and LTTE are one and the same and this was told by none other than John Cushnahan EU monitoring mission’s head in 2004 and we can’t disagree with him on that assessment.

What needs to be clearly asked is where in this world can people be given everything they want or aspire. In the case of Sri Lanka anyone who wishes to say that Tamils or minorities have no rights must first prove that the right they say they can’t enjoy is enjoyed only by the Sinhalese. As things stand the minorities enjoy far more rights than the majority.

Let us also remind readers that for Sinhalese this is the ONLY country they have. The Tamils have Tamil Nadu where 9/10 Tamils live – they can go to Tamil Nadu. The Sri Lankan Muslims have the Middle East – they can any time be welcome in the Middle East. The Sri Lankan Christians/Catholics have the West and Vatican – they too will anytime welcome them. Where does that leave the Sinhalese Buddhists? Who will accept the Sinhalese Buddhists? – they only have Sri Lanka and that is why they want to protect it and they should protect it and why they have every right to protect it, but in so protecting they have not denied any others their right to live in Sri Lanka. All that they ask in exchange for these equal rights is for them not to try to make Sri Lanka lose its historical/cultural Buddhist identity.

These aspects must be on everyone’s minds when making accusations because politicians only use them as slogans for political mileage and personal benefits.

Home » What are the rights Constitutionally & Legally denied to Tamils in Sri Lanka?