What is all this fuss about Halal and Haram? 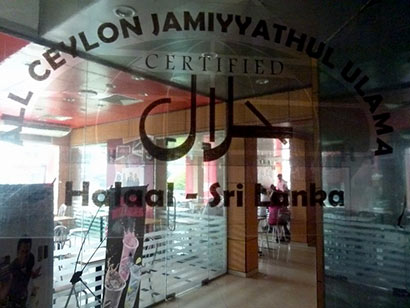 Judging by the flow of articles in praise of the peaceful nature of Islam and the peaceful co-existence of Muslims the general inference is that all the issues have been created by the Buddhist “extremists”. Having read a few articles I realize the issue is becoming misunderstood because the Muslims are evading answering what the Buddhists are asking and ignoring the comparisons they are giving about Muslim expansionism historically and even currently.

Looks like the best mode of defence is to use the media and a whole waiting list of anti-Sinhala Buddhist groups and individuals to ridicule the Buddhists citing quotes from Buddha demanding they be tolerant and compassionate – yes, so that the country can be run as they see fit and Buddhists should just meditate and hope for nirvana.

But there is a bigger story.

I can understand when Buddhists ask why Muslims are using loudspeakers even after the Supreme Court interim order. It is not only a noise pollution but irritating as well.

I can also understand why Buddhists are complaining about mosques springing up like mushrooms – you won’t find any Muslim nation allowing such.

I do empathize with the fact that having shown a clear majority population throughout history and the nation being led by Sinhalese Buddhist Kings, the Sinhalese do have greater claim to Sri Lanka than other faiths.

I also feel very upset about the brutal way animals are slaughtered and when I read that animal slaughtering was forbidden during the times of the Sinhala kings I was greatly stressed about the horrors that prevail in the manner animals are being slaughtered by Muslims. Whatever the excuse given – it is an ugly sight to see cattle that is used for agriculture and other services put to death and blood pouring everywhere. To me it borders the inhuman whatever scientific reasons given.

I also agree with the Buddhists who are asking a very simple question – in fact I am asking the same question myself. Why are Muslim women going back to wearing tribal attire – the women did not dress like this 20 years ago? There were no women in black at all. I think the Borah dress has never seen a sea-change so I too wonder why and when I look a bit closer I realize it is not the elite Muslim women but the poor and middle class. It is not the elite Muslim in the Arab men’s dress but the poor and middle class – are we missing something! Like the Buddhists I am wondering if the Muslims say they want to live in peace with the communities in Sri Lanka why are they differentiating themselves and distancing themselves – because the whole list of changes we see in them are taking them towards that path and they cant deny that by portraying anti-Muslim slogans. Every person has a right to know where these Muslims plan to take their “extremism” – I certainly want to know because it started with the mosque going ritual, then more mosques, then changing attire, then fortifying Muslim areas by buying land/property, then Sharia banking systems, then halal labels and certificates – so as a citizen I want to also know what Muslims will be asking next!

What many wonder is what all this fuss is about halal – these certificates did not exist neither did any halal labels and Muslims ate and drank. Who has started this new halal mania?

In my quest to find out about halal I realized that if Halal labels on meats in non-Muslim countries have no value and is considered Haram because it is not slaughtered by a Muslim (even if it is slaughtered according to Muslim customs) – there is no basis for Halal certification in Sri Lanka or any other country.

I am really surprised that the non-Muslim companies in Sri Lanka in their greed for profits thinking that the Muslims would boycott their products did not show any concern about divulging their ingredients to a private Muslim company (intellectual property rights) or even bother to question how they test the items for halal compliance?

The halal issue appears to be a nice way of generating employment for Muslims and building up their base globally.

I personally disagree to a Government accepting a minority religion beliefs overlooking the majority and giving them the authority to dictate how every item is purchased. That’s a bit too haughty.

These are a few points I noted for all those wanting to understand what this halal/haram is:

Food Groups for Muslims are divided as

List of Halal and Haram foods are divided as:

Muslims can only eat food that has been classified Halal Foods by the Prophet and has to be slaughtered by a Muslim. If the meat is classified as halal but not slaughtered by a Muslim it is Haram to eat.  This means Muslims realistically speaking cannot purchase foods from a non-Muslim company in view of non-halal items availability. This also nullifies the insistence on halal labels/certification because it is produced by non-Muslims.

How many slaughter houses actually follow the halal animal slaughter rules (Islamic Shariah (Zabiha) rules? All these mechanical details does no justice to the animal whose rights to live are being denied.

· Weapon has to be sharp to cut the four tubes (4arteries on the neck – vein, jugular artery, gullet food pipe and wind pipe)?

· If weapon made of iron is not available and animal is dying pointed objects like glass or sharp stone can be used to kill.

· When slaughtering the name of “Allah” (Bismillah) has to recited.

· Sharia rule says to give animals water before slaughter – Is this being done?

· Sharia rule says to inflict less pain by using the sharpest weapon – Is this being done?

· Sharia rule says animals cannot be skinned before its death – Is this being done?

· Sharia rule says animals cannot be slaughtered on Thursday night or Friday before Dhohr – Is this being followed?

· Sharia rules that animals cannot be slaughtered in front of other animals of its own kind – How many Muslims follow this especially in abattoirs and how practical is this in terms of demand and supply for meat industry?

· If the package of meat is produced by non-Muslim countries/companies even though label says it is “slaughtered to Islamic laws” it is Haram even if the meat falls into halal meat category. Meats in groceries though with halal labels does not guarantee that it has been slaughtered according to halal methodology by a Muslim – but Muslims are allowed to eat so long as the Muslim slaughtering the animal says “Allah” throughout slaughter in the machine.

Any form of alcohol is prohibited – those that drink liquor are considered not Muslim! I can count a lot of Colombo Muslims into this list – probably we need to expand the “others” in country population statistics to include them!

The Prophet cursed the person who grows grapes to prepare liquor, who crushes grapes to distil liquor, who sells liquor, who passes a glass of liquor to someone and one who profits in any manner from a transaction of liquor – the person who sits with those that drink liquor is also cursed. Non-Alcoholic beer is also prohibited. Please count the Muslims that fall into this category – how many Muslims do not eat Christmas cake (which as brandy) – getting a halal certificate for the cake shop which also prepares cakes with even the smallest quantity of liquor still is Haram – lesson is the Halal Certificate is worth nothing.

Gelatin can be eaten if the doubt is whether it has been extracted from an animal or vegetable. If it known to be from an animal it is Haram to eat unless animal has been slaughtered according to halal method (ie by a Muslim)

Alcohol in medication – though dosages of alcohol is used in drugs and medication it is permissible to take.

· If the preservative does not retain original form and transforms into another substance it is still permitted to take preservative.

All these new items designed to add flavour to foods did not exist when Prophet was born therefore much of these new “dos” and “don’ts” look like things that which Islamic religious leaders have created.

I am really interested to know which Muslim follows all of these halal/haram lists to the word!

If people look at the issues in a sane way it is not hard to see that Muslims are making a lot of demands and expecting all non-Muslims to agree to what suits their religion. That is a bit unfair of Muslims. They must learn to be tolerant of other faiths.

Non-Muslims never serve pork if a Muslim friend is coming for a dinner or even at weddings people go out of their way to exclude pork from the menu – but given that the cow is viewed as a sacred animal by both Buddhists and Hindus, do Muslims ever reciprocate?

I think it is time the Muslims seriously introspect – the boundaries have been crossed and Muslims know it but don’t seem to want to admit it. But it is something the Muslims now need to do.

I believe if the areas that the Buddhists have highlighted as reasons for their anxiety are removed by the Muslims if as they say they wish to live in peace – then everyone can get back on track – it’s the most sensible thing to do. Companies should not take sides of religions for profits!

9 Responses to What is all this fuss about Halal and Haram?

Home » What is all this fuss about Halal and Haram?