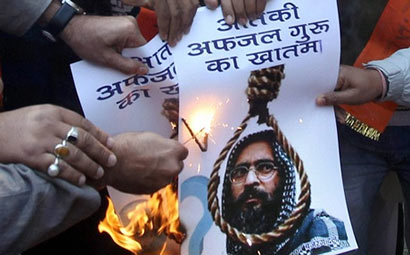 By A Subramani – Submitted by Walter Jayawardhana

CHENNAI: The execution of Afzal Guru, the second high-voltage hanging in three months, has sent shivers down the spine of advocates involved in a last-ditch legal battle to save the three death convicts in the Rajiv Gandhi assassination case – Murugan, Perarivalan and Santhan.

Decrying the secrecy shrouding the operation, which started when the President rejected Afzal’s mercy petition on February 3, advocate and former special public prosecutor of the human rights court here, V Kannadasan, said the state should not deprive anyone of their right to exhaust legal remedies available to them. Had the rejection been duly communicated to Afzal, he would have challenged the validity of the rejection order which had come more than 11 years later.

In that case, his case would have been heard by the Supreme Court along with that of the three Rajiv case convicts and D P S Bhullar of Punjab. “The state cannot execute anyone without giving reasonable time to avail themselves of legal remedy,” he said.

“The government’s intention is now doubly clear. We feel the noose round the three has definitely tightened. Had they not challenged the belated presidential rejection of their mercy pleas in court, even they would have met the same fate,” said V Elangovan, who took up the case of Nalini Sriharan and others a few years ago.

His senior and well known criminal lawyer S Duraisamy is more furious and forthright. “No person having a little regard for human rights would support this execution. First Kasab and then Afzal – the Centre is inching towards the three Rajiv case convicts now lodged in Vellore central prison. The government will not wait even for a second if the apex court rejects their plea.”

A senior jurist, not willing to be named, said: “Death penalty seems to be the flavour of the season. From rape to assassinations, people want death for every offence. An obliging government is using executions as a political tool to outbeat its rivals. The task has become very hard for people opposing death penalty.”

Asked whether it is a sign of boldness and an act of a strong government, the jurist said: “Always weak governments tweak public pressure and political compulsions to bring draconian laws. Centralised power backed by draconian laws is recipe for disaster and bad news for democracy.”

The Supreme Court has called for a list of long-pending mercy petitions, and the Centre has submitted a list which, among others, has Afzal’s name too, Elangovan said. While the apex court is seized of the matter, how is the government justified in hanging him, he asked.

“We are aware that we have to keep the case going in the Supreme Court as long as the Congress is in power at the Centre. Unlike the Congress governments in Maharashtra and Delhi, which hanged Kasab and Guru respectively, Tamil Nadu will not be a party to secret hangings,” Duraisamy said. (Couresy Times of India)