Why has Pottu Amman’s name been included in “Wanted” persons list of Interpol? 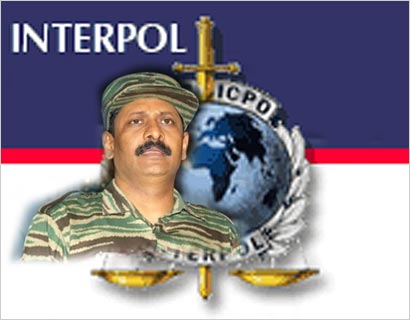 Does this mean that, though the Sri Lanka (SL) government earlier concluded that he was dead, by last December there were clues to impel the government to change its view? According to government sources , Pottu Amman’s name is in the Interpol list because his death certificate was not issued.

Previously, the Sri Lankan government declared that Pottu Amman also died at the time Prabhakaran was killed. However, Pottu Amman’s body was not recovered though the government was able to discover the bodies of Prabhakaran and the other Tamil Tiger leaders who died.

Neither, is there a photograph testifying to his death in the possession of the government despite the fact that the bodies of all the other Tamil Tiger leaders who died with Prabhakaran, and their photographs are available.

The government on the other hand said, Pottu Amman’s body could not be recovered because he committed suicide by setting fire to himself ; therefore, even his ashes could not be discovered. It was also the governments’s view that his wife too committed suicide with him. When the Indian government asked from the Sri Lankan government . for the death certificates of Prabhakaran and Pottu Amman to conclude the Rajiv Gandhi assassination case, the Sri Lankan Govt. confirmed that both had died.

In a case heard against Prabhakaran and Pottu Amman ,in a Court in Sri Lanka , the Sri Lanka Security Division declared that both of them had died , but only Prabahakaran’s body was found , while Pottu Amman’s wasn’t. The Court accepted this averment.

Even though India was informed of this , India did not accept this information. India refused to accept the death certificate of Pottu Amman without his body being discovered. Pertaining to the acceptance of the death certificate of Prabhakaran , it called for more evidence to confirm his death,Later , the Indian Intelligence Service began directing its attention towards searching for Pottu Amman.

The Indian intelligence service was able to obtain a clue from a person who was with Pottu Amman during the final phase of the war in Wanni. He informed that Pottu Amman in the final phase of the war had sustained gunshot injuries and received emergency treatment for it . However , before receiving full treatment , he fled the scene In any case , he assumed that , as the injury was very serious , it was impossible for him to be alive without his injury having been treated.. He also presumed that that he could have died while escaping. . On the contrary , if he had received treatment , he could be alive , he added. The Indian Govt. began entertaining the belief that Pottu Amman could still be alive only after receiving this piece of information from the Indian intelligence service.

A popular Indian Tamil Magazine ‘Ananda Viketan’ meanwhile published that, the issue whether Pottu Amman is dead or is still alive is shrouded in mystery.

When the Tamil Nadu MPs visited Sri Lanka sometime ago , they met and questioned Basil Rajapaksa about Pottu Amman, the Magazine reported. Basil Rajapaksa has replied that, although the security Division identified the body of Prabahakaran, they could not say anything with certainty pertaining to Pottu Amman. The magazine carried a photograph of Prabhakaran and Pottu Amman dressed in white seated together which had been published in a pro Tamil Tiger website.

This magazine related the background story to this photograph which was taken a week before the conclusion of the war on the 18th of May 2009, and after Prabhakaran appointed Pottu Amman as the Tamil Tiger Deputy leader. All the Tamil Tiger leaders had graced this occasion and have expressed their consent to this appointment, the Magazine added.

Thereafter, the Tamil Tigers had separated into three groups: one group was to engage in repulsing the advancing Army; the second group was to flee the battlefield while the third group was to be in the ready to surrender to the Army when it penetrates. Prabahakaran had given these instructions, and all present have agreed to this plan, the Magazine reported.

The Defense secretary recently announced that the Tamil Tiger funds, assets and commercial ventures are in Eritrea. However, the authorities of Eritrea had rejected the Sri Lanka government’s offers to take action against them. In any event, the Tamil Diaspora taking into account the division of opinion among those in the Tamil Tiger International chain, is of the view that if Pottu Amman is living , he is unlikely to come to the open now. Speculations are rife among the Tamil Diaspora that K P who was arrested earlier, surrendered to the Sri Lankan government after he became aware that Pottu Amman was alive and in fear of him.

Even though K P had been captured, the chain had not been disrupted. This admission has further fuelled the suspicion that Pottu Amman is still among the living.

At all events, even if the realization dawns on the SL Govt. that Pottu Amman is living after all , and every doubt in that regard is dispelled, it is impossible to imagine that the Govt. would officially make an announcement to that effect.

3 Responses to Why has Pottu Amman’s name been included in “Wanted” persons list of Interpol?

Home » Why has Pottu Amman’s name been included in “Wanted” persons list of Interpol?