Will not release Photos of Osama-US 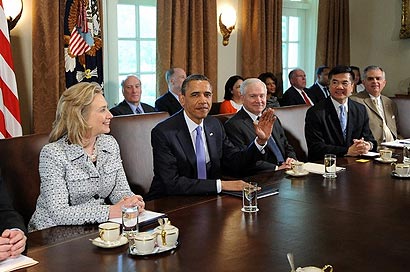 US President Barack Obama said that he will not release gruesome photos of Osama bin Laden’s corpse.

“We don’t trot out this stuff as trophies,” Obama told Steve Kroft of 60 Minutes. “We don’t need to spike the football.”

Obama also said he wanted to make sure that “very graphic photos of somebody who was shot in the head are not floating around as an incitement to additional violence, or as a propaganda tool.”

Some aides and members of Congress backed release of the photos to answer conspiracy theorists who claim bin Laden remains at large.

In his 60 Minutes interview, Obama cited photos, facial recognition technology, and DNA evidence as proof that a weekend raid in Pakistan was successful.

“There is no doubt that we killed Osama bin Laden,” Obama said.

Other aides and lawmakers had objected to release of death photos of bin Laden because they could increase the threats to Americans overseas.

“The risks of release outweigh the benefits,” said Rep. Mike Rogers, R-Mich., who chairs the House Intelligence Committee. “Conspiracy theorists around the world will just claim the photos are doctored anyway, and there is a real risk that releasing the photos will only serve to inflame public opinion in the Middle East.”

CIA Director Leon Panetta, in media interviews and briefings to members of Congress, had indicated that the administration planned to release post-mortem pictures of bin Laden, though other White House officials stressed in recent days that a final decision had not been made.

Press secretary Jay Carney said Obama did not make a final decision until this morning.

It applies “all visual evidence,” the spokesman added, including videos.

The administration also has video of bin Laden’s burial at sea, shortly after the world’s leading terrorist was shot to death by a Navy SEAL during the raid.

The photos in question are “gruesome,” Carney said, one reasons some administration officials — including Obama — objected to their release.

The president and aides had also sought to gauge reaction to a photo release including in the Muslim world and whether jihadists may try to use the photos as a new rallying cry.

A partial transcript of the 60 Minutes interview:

OBAMA: “When they landed we had very strong confirmation at that point that it was him. Photographs had been taken. Facial analysis indicated that in fact it was him. We hadn’t yet done DNA testing, but at that point we were 95 percent sure.”

Question: “Did you see the pictures?”

Question: “What was your reaction when you saw them?”

Question: “Why haven’t you released them?”

OBAMA: “You know, we discussed this internally. Keep in mind that we are absolutely certain that this was him. We’ve done DNA sampling and testing. And so there is no doubt that we killed Osama bin Laden.

“It is important for us to make sure that very graphic photos of somebody who was shot in the head are not floating around as an incitement to additional violence or as a propaganda tool. You know, that’s not who we are. You know, we don’t trot out this stuff as trophies.

“You know, the fact of the matter is this was somebody who was deserving of the justice that he received, and I think Americans and people around the world are glad that he is gone. But we don’t need to spike the football, and I think that, given the graphic nature of these photos, it would create some national security risk, and I’ve discussed this with Bob Gates and Hillary Clinton and my intelligence teams, and they all agree.”

Question: “There are people in Pakistan, for example, who say, ‘Look, this is all a lie. Obama, this is another American trick. Osama is not dead.'”

OBAMA: “You know, the truth is that we are monitoring worldwide reaction. There is no doubt that bin Laden is dead. Certainly, there is doubt — no doubt among Al Qaeda members that he is dead.

And so we don’t think that a photograph, in and of itself, is going to make any difference. There are going to be some folks who deny it. The fact of the matter is, you will not see bin Laden walking on this Earth again.

3 Responses to Will not release Photos of Osama-US

Home » Will not release Photos of Osama-US