Will Ranil do to China what JR did to India? 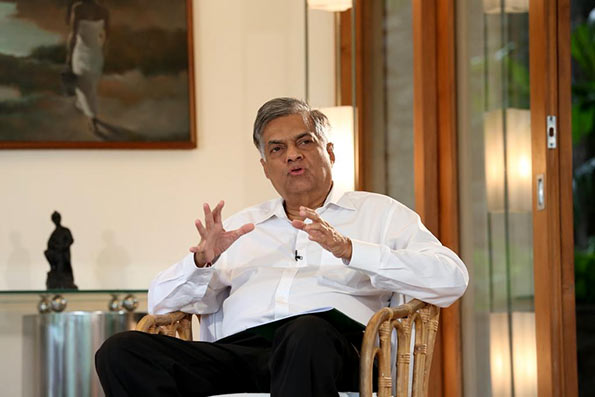 There is an amazing similarity between the trip to Sri Lanka by Rajiv Gandhi to sign the Indo-Lanka Agreement in 1987 and the visit to China by Ranil to escape from the Chinese Debt Trap.

Ranil’s uncle JR agreed to sign the Indo-Lanka Agreement in 1987 because there was nothing else to do to escape from the Eelam War, India set as a trap to Sri Lanka. JR had set the trap himself. During the 1977 general election, JR ridiculed the former Prime Minister of India and her son politically.

The reason was the Government of Indira which was in power was helping beyond diplomatic limits Madam Bandaranaike’s Government which was in power in Sri Lanka at that time, to secure their political powers. Then Opposition Leader JR knew very well that the strength required by Prime Minister Bandaranaike to suppress JR and his opposition was being provided by Indira. JR predicted that, similar to the loss experienced by Indira-Sanjaya mother-son couple at the 1977 elections in India, the Sirima-Anura mother-son couple would also lose at the general election in Sri Lanka. JR mocked Indira thus, thinking that she would not come back to power. However, before long she did come back to power.

At that time her friend Madame Bandaranaike was in the Opposition. Madame Bandaranaike knew that Indira had something against JR in her mind and sought Indira’s assistance to destroy JR. She pointed out that the foreign policy of the JR Government which was American friendly was a threat to Indira’s India which was friendly towards the then Soviet Republic. Indira’s Government decided to help the Tamil militants in the North and East of Sri Lanka to destabilize JR’s Government and to destroy JR. The war which was created in the North under the blessings of Indira succeeded in destabilizing JR’s Government.

Fortunately for JR, during the midst of the war in the North, Indira was assassinated. JR laid a net to build a new relationship with Rajiv Gandhi who became the new Prime Minister of India. Rajiv got caught to JR’s net. Those who advised Indira to be careful when dealing with JR regarding Sri Lanka mentioned the same thing to Rajiv as well. However Rajiv, through his special representative Romesh Bandhari turned a new page in Indo-Lanka relations with JR.

Somehow discussions between JR and Rajiv proved to be successful. JR agreed to sign the Indo-Lanka Agreement and handed over the war to India itself which had created the war themselves, making Madame Bandaranaike who dreamt of coming back to power because of the war, helpless. She did not tolerate Rajiv signing agreements with JR. When bombs were exploding in Colombo during the time Indira was alive, Madame Bandaranaike said that she would be able to talk with India and solve this problem. She said that since JR fell out with India, India would not help JR. However, Indira’s son Rajiv helping JR was a huge surprise for her. From then onwards she started attacking India. It was JR who made use of that.

Similar to India helping Madame Bandaranaike during 1970-77, within the period 2005-2014 China helped Mahinda Rajapaksa’s Government. The Chinese President visited Sri Lanka during the time that the Uva Provincial Council election was being held. Mahinda realized that it would be difficult to win Uva only in the midst of preparations for the election. The Chinese President promised to assist Sri Lanka to reduce the price of fuel providing a political advantage to Mahinda.

Even by that time there was a massive financial crisis within the country and a situation had arisen, where Mahinda was unable to present a Budget prior to contesting the presidential election. It was China who helped out Mahinda in the 2015 Budget as well. China helped Mahinda because Mahinda trapped Sri Lanka in a Chinese Debt Trap. Mahinda obtained loans at high rates of interest from China to maintain white elephants such as Mattala Airport and the Hambantota Harbour which did not bring in any income.

Although China helped Mahinda during the 2015 presidential election it was Maithri who won. What Maithri and Ranil had to do was to shoulder the Chinese Debt Trap which Mahinda had created. Mahinda counted the days when he would come back to power while watching the Maithri-Ranil Government being destroyed due to the Chinese Debt Trap. Ranil criticized the Chinese Harbour Project during the 2015 presidential election similar to how JR mocked Indira in 1977.

This hurt China. Mahinda believed that China will trap the Maithri-Ranil government deeper in the Chinese Debt Trap. However, just like JR began a new journey together with Rajiv Gandhi, Ranil also embarked on a new journey with China and agreed to a loan transaction with China. JR captured Rajiv through the Indo-Lanka Board of Administration of Cricket. Ranil captured China through a PR Company in Hong Kong. The question is whether, similar to India trying to save Sri Lanka from the war trap,they themselves set up, China would be willing to save Sri Lanka from the Debt Trap they themselves had set up.

A Chinese scholar named Zhuang has told the Global Chinese Times newspaper that China should carefully study Ranil’s proposal and approval should not be granted at once. This is similar to the advice given to Rajiv by Indira’s advisers, while Rajiv was engaged in discussions with JR. Everyone is waiting and watching as to what China’s response will be to Ranil’s proposals.

3 Responses to Will Ranil do to China what JR did to India?

Home » Will Ranil do to China what JR did to India?