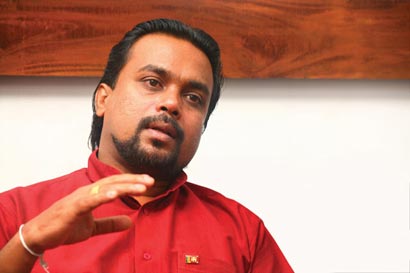 National Freedom Front (NFF) leader and housing minister Wimal Weerawansa said that the Tamils couldn’t have the exclusive right for land in the Northern Province.

Addressing a public gathering at Daminnagahawatte, Katana following the launch of ‘Janasevana’ housing project, Minister Weerawansa emphasized that the ongoing campaign by Tamil politicians to pressure the government over the land issue wasn’t fair, therefore it was not acceptable.

An irate Weerawansa urged Tamil political parties and groups not to look at the issue through what he called ethnic eyes. The bottom line was that the government couldn’t adopt a land policy based on ethnic lines whatever the Tamil politicians said.

MP Weerawansa criticized the TNA, TELO, PLOTE and EPRLF for launching a protest in Vavuniya over the land issue. In spite of the LTTE being defeated over two years ago there were those who still pursue Prabhakaran’s eelam dream, he said. Nothing could be as reckless as the effort to provoke Tamil speaking people living in the

Northern and Eastern Provinces, he said. Those seeking to undermine post-war recovery process were now working overtime to cause chaos, the minister alleged.

The NFF leader urged the people to be cautious in the wake of the ongoing sordid operation to trigger fresh ethnic hostilities.

MP Weerawansa paid a glowing tribute to slain SLFP heavyweight Jeyaraj Fernandopulle. Jeyaraj had the talent to counter the Opposition in and out of parliament, the minister said adding that the assassination deprived the country of Jeyaraj’s services. Had Jeyaraj been alive, he could have played a crucial role in the post-war era.

Alleging that the move to re-register land was unjustifiable, they said the government’s action caused suspicion among the people. They also expressed concern about taking over of 8,000 acres for the proposed Sampoor coal-power plant. They alleged that the government was planning to utilize a section of the land to set up a settlement. They urged India to intervene on behalf of some 1,400 families denied of their land due to the coal-fired project spearheaded by India.

They also opposed the creation of a new Divisional Secretary’s Division in Mullaitivu, alleging the government was planning to accommodate outsiders in the area.