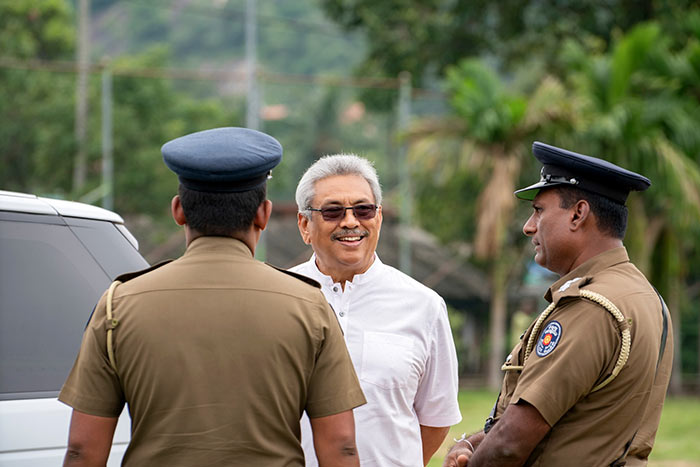 Deputy Solicitor General Nerin Pulle, on behalf of Attorney General Dappula de Livera, yesterday, informed the Court of Appeal that the signature placed on the citizenship certificate of Gotabaya Rajapaksa by Mahinda Rajapaksa, in his capacity as the President, was legitimate.

DSG Pulle said that the executive President had the authority to exercise powers of ministers as and when subjects were not assigned to them, the Court of Appeal was told.

The court was also told that President Rajapaksa had signed Gotabaya Rajapaksa’s citizenship certificate in terms of the constitutional powers vested in him.

DSG Pulle appeared before the Court of Appeal in connection with a petition filed by civil society activists Gamini Viyangoda and Chandragupta Thenuwara seeking a court order to prevent the former Defence Secretary from contesting the presidential poll.

The Attorney General told court that the Controller of Immigration and Emigration had informed him that his institution didn’t have any document pertaining to the issuance of citizenship certificate to Gotabaya Rajapaksa.

Asked by the President of the Court of Appeal, Yasantha Kodagoda, PC, why the relevant file couldn’t be found, DSG Pulle said that due to the Immigration and Emigration Office being shifted, from Bambalapitiya to Punchi Borella, in 2005, not only Gotabaya Rajapaksa’s file but all documents issued upto 2007 were not available.

DSG Pulle said that steps had been taken to record documents onto computers.

President’s Counsel Romesh de Silva, appearing for Gotabaya Rajapaksa, said that the Attorney General had been silent on the destruction of documents during that period.

PC de Silva said that as the Magistrate’s Court was hearing a case in respect of a complaint made by the petitioners, the Court of Appeal lacked the judicial power to provide relief or issue an order in that regard.

DSG Pulle said that there hadn’t been reports to the effect that documents were destroyed during that period.

Counsel for petitioners, Suren Fernando, said that the citizenship certificate was not legitimate as the documents relevant to the issuance of the said certificate couldn’t be considered legitimate.

Counsel Fernando said that though in terms of the Citizenship Act 19(2) the certificate issued to a dual citizen could be signed only by the Secretary to the ministry responsible for the subject, President Rajapaksa signed it.

Counsel Fernando said that though at the time Mahinda Rajapaksa had signed the Citizenship Certificate, on Nov 21, 2015, he had been elected President, he was yet to take oaths. The immigration and emigration subject had been assigned to a minister by way of a gazette notification only on Dec 08, 2005, Counsel Fernando told the court.

Pointing out that the election of a non-citizen as the President posed a grave danger to national security and sovereignty of the country, the Counsel asked for an interim order as sought by the petitioners.

The Court of Appeal will convene at 1.30 pm today.

(Source: The Island – By Chitra Weeraratne and A.J Abeynayake)