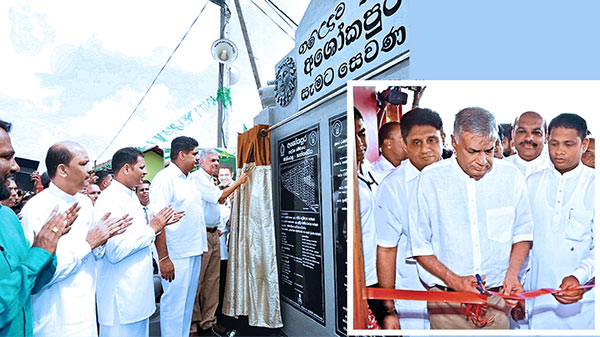 Prime Minister Ranil Wickremesinghe said the government will never shrug off the responsibility vested upon it to revive the country’s economy.

PM Wickremesinghe further stated that the present government took over the country with a colossal mountain of debt and the country is yet to reach the peak of funding these debts.

He said the country is yet to pay debts running into trillions while addressing the gathering at the ceremony held to hand over the ‘Ashokapura’ housing project in Maningala, Nattandiya.

Premier Wickremesinghe, while pointing out that the debt repayment requires a time expansion of three generations, said the present government will not let the future generation pay off these debts.

PM Wickremesinghe also said the government will pay off all these debts by the end of next year. He also said that it will be the biggest challenge the present government has taken up so far.

PM Wickremesinghe also said that the government’s objective is to develop the country with a public oriented approach while encouraging investments to generate new job opportunities.

Ashokapura is the largest housing village project ever established, which became a realisation under the ‘Hisata Sevanak, Semata Nivasak’ (A roof over everyone’s head) concept. The housing project which was established spending Rs. 540 million, accommodates 98 persons. They received deeds from Prime Minister Ranil Wickremesinghe.

‘Ashokapura’ is the 43rd model housing scheme under the Udagam concept.