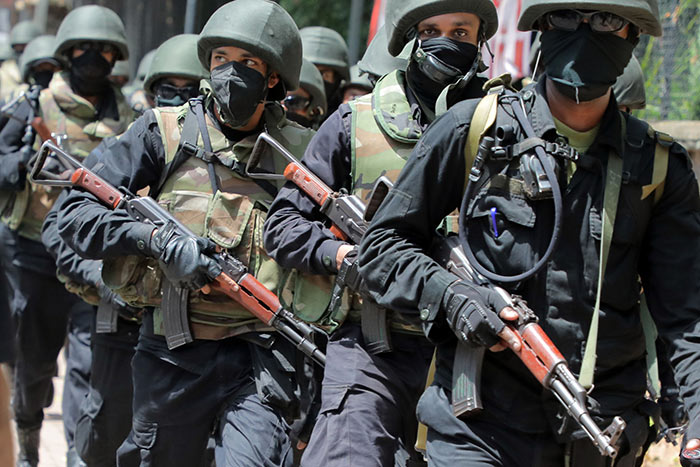 The Sri Lanka Army announces that they will have to use full force as necessary to protect public property and public life from violent people.

The complete announcement issued by the Sri Lanka Army

Members of the Armed Forces and the Police in terms of provisions, vested in them by the Constitution of Sri Lanka have been empowered to enforce law and order of the country and maintain the same in order to protect her people, public property and the country at large at the expense of their own lives. This has been practised since the country became an independent state and a free nation, through which the sovereignty of the republic, freedom of expression and free movement of the public as enshrined in the Constitution are upheld and exercised as it has been distinctly manifested in the most recent months during the series of public protests that began in May this year.

It is worthwhile to mention here that except for a few negligible arguments and skirmishes between the protesters and members of the Army, NO major incidents of violence of considerable nature occurred due to enforcement of law and order or breach of it during those mass protests, including the one on 9 July in Colombo, Fort.

The Chief of Defence Staff, Tri service Commanders and the Inspector General of Police on more than THREE occasions publicly appealed to protesting groups to remain calm, safeguard state buildings and all property and earnestly urged the protesters to resolve the issues constitutionally with the exit of the President Gotabaya Rajapaksa from the country.

All Heads of the Armed Forces and the Police during meetings with the acting President and Prime Minister, Speaker of the Parliament and Political Party leaders in the past 72 hours while requesting all of them to accelerate resolution of the issues, pertaining to the political instability and the crisis in the island through  constitutional provisions, unanimously maintained that peaceful protests should NOT in anyway be dealt with full force, BUT with the minimum force as long as those protesters do not resort to violence or damage the public property.

Irrespective of those assurances, it has been unfortunately observed that a certain section of the protesters, purposefully deviating from its proclaimed  ‘non-violent’ approach continued to breach law and order as of Wednesday (13) afternoon and resorted to violence by trying to place the Parliament complex as well as the Speaker’s official residence under siege while destroying Police barricades through heavy machinery brought in there, in an attempt to take control of the Parliament complex which is the sole legislative body which can only exercise the sovereignty of the country and democratic values in conformity with Constitutional provisions.

By 7.00 pm on Wednesday (13), those unruly protesting mobs, unresponsive to repeated appeals of Army personnel, trying to forcibly enter the Parliament complex aggressively went on harassing and attacking the troops on duty using clubs, iron rods, stones, helmets, etc and snatched  TWO T-56 weapons with ammunition rounds and caused injuries to a dozen of  Army personnel, making two of them even unconscious who have now been admitted to the Colombo National Hospital and the Colombo Army Hospital for emergency treatment. The Police have been alerted to the loss of these two T-56 weapons, now possessed by those protesters who fled with those weapons.

In return, Army troops using minimum force after firing several shots in the air held some of those unruly violent elements who were inciting others too to harm Army personnel and the Police. However, Army personnel along with Policemen, not deterred by their cycle of violence brought the situation under control as of Wednesday (13) night with minimum force and took all precautionary security measures by dispersing those violent elements, awaiting to storm the Parliamentary complex.

In view of escalation of violent acts, those protesters, intent on harming the Armed Forces or the public property are therefore earnestly urged to desist from all forms of violence immediately or be prepared to face consequences as members of the Armed Forces are legitimately empowered to exercise their force, if the situation deems necessary as security to the public property, key installations, vulnerable points and human lives, does fall within the purview of their responsibility. (Ends)