Aruwakkalu sanitary garbage dump to be ready next September 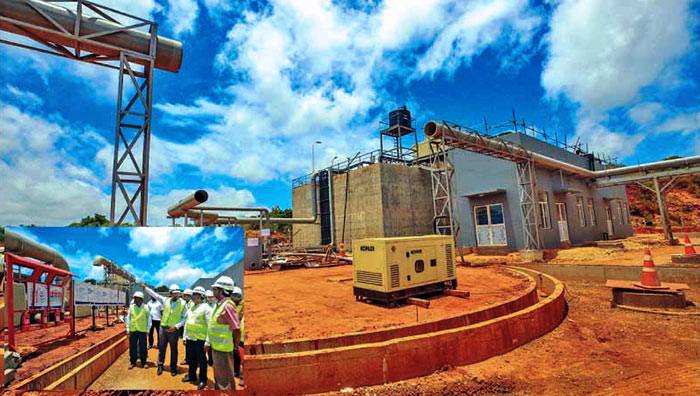 Work on the Puttalam, Aruwakkalu Sanitary Garbage Dump will be expedited as a scientific and eco-friendly solution to the garbage problem.

Accordingly, 1,200 tonnes of garbage per day will be deposited at the Aruwakkalu Scientific Sanitary Garbage Dump and the Colombo Metropolitan Solid Disposal (Metro Colombo Solid Waste Management) project will be completed in September 2021.

Garbage will be taken to Aruwakkalu, 160 km away from Kelaniya by a special train.

The Urban Development and Housing Ministry requests the public to assist in this project as a national task and to assist the garbage collection process carried out by local authorities by sorting the garbage in their own homes.

Garbage brought from Kelaniya by rail will be kept at the Aruwakkalu Sanitary Garbage Yard. Two special trains consisting of 30 compartments each will be used to transport the garbage and one train can carry 600 tonnes of garbage at a time.

Generating electricity, purifying our water and conducting laboratory tests here can also be referred to as additional sources of income.

The need for a scientific, eco-friendly long-term solution to the garbage crisis has been the burning need for a long time and was first addressed during the tenure of President Gotabaya Rajapaksa as Defence and Urban Development Ministry Secretary.

These facts were revealed during a visit to the Aruwakkalu garbage yard by Urban Development, Coast Conservation, Waste Disposal and Sanitation State Minister Dr.Nalaka Godahewa and the Urban Development and Housing Ministry Secretary.

Minister Godahewa said the construction of the Aruwakkalu Garbage Yard is expected to be completed within another year.

“Garbage on an average is around 600-700 metric tonnes per day in the Colombo city alone. Garbage is also being collected in major cities around Colombo. Arrangements were made to bring these to the Aruwakkalu area and keep them in a garbage collection facility. We know that all over the world at that time there was a concept of garbage dumps.The concept of this sanitary garbage collection centre was chosen as a solution to the huge health problem that exist in Sri Lanka. A very formal concept had been formulated in this regard. It was planned to collect this garbage in the Kelaniya area, separate it and then bring it to the Puttalam area by rail and store it in the sanitary facility. We believe the construction can be completed in about a year.

“A few decisions we need to be made regarding the final decision we will take on some of these issues and the overall issues in Colombo and the suburbs. Garbage is not something we should waste. There are many rewards to be gained from this.We can generate energy from them. As an industrial project, we can even get the materials needed to make bricks-like products as a final result. Our aim is to make the most of these waste materials without wasting anything and produce the bulk of them in the most sanitary manner.We hope to end this whole process in the near future and provide a clear solution to this problem” State Minister Dr. Nalaka Godahewa stated.

The sanitary landfill project is located on a 265 acre area in the Aruwakkalu area and it is noteworthy that a separate section has been set aside as a park, to create a protected area and an eco-friendly environment.

The Urban Development and Housing Ministry states that it is common in many developed countries of the world to produce eco-friendly sanitary waste disposal facilities as a proper scientific and eco-friendly solution to the garbage crisis and this is a successful project to solve the garbage problem in the country. The total cost of the project is US$ 120 mn.

Construction is being carried out by the China Harbour (Pvt) Ltd and is being overseen by the Central Engineering Consultancy Bureau (CECB) and a South Korean company.

Home » Aruwakkalu sanitary garbage dump to be ready next September