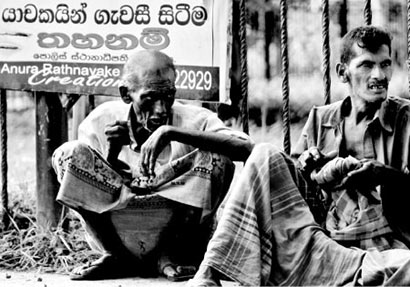 In view of the forthcoming Commonwealth Heads of Government Meeting (CHOGM) in Colombo, about 200 suspected beggars, who had been arrested and held in remand custody, were transferred to a facility maintained by the Department of Social Services in Ridigama, last week.

The beggars were rounded up at various places in Colombo on Friday (23) and were remanded at the Welikada Prison.
The following day (24) afternoon, they were taken to Ridigama, sources said.

Both men and women were arrested while engaging in begging, under a Court order. This was done as part of a plan to rid the city streets of beggars, before the scheduled CHOGM events to be held in Colombo shortly, the same sources said.

Commissioner General of Prisons, Chandrarathne Pallegama, confirmed the beggars, who were remanded, were taken to Ridigama on 24 August.