Kerry hopes to reset US relations with Sri Lanka 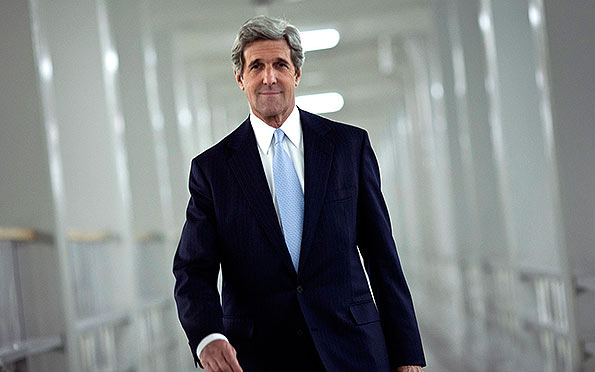 A senior U.S. State Department official said Wednesday that Secretary of State John Kerry was traveling to Sri Lanka to show that the U.S. “applauds the vision” of that country’s new government.

Kerry will visit Colombo on Saturday as part of a weeklong trip that includes stops in Kenya and Djibouti.  He will be the first secretary of state to visit Sri Lanka since Colin Powell did so in 2004.

Sirisena, who quit Rajapaksa’s government to challenge him in elections, vowed to carry out reforms that he said would reverse his predecessor’s autocratic and authoritarian-style government.

Sirisena enacted a “100-day plan” that includes reducing the power of the presidency, expanding human rights and promoting freedom of the press.

At a Wednesday briefing, the senior State Department official said the U.S. foresees having a “mutually helpful relationship” with Sri Lanka, a country that could become a “beacon” for democracy and human rights.

One problem with the U.S. relationship with Sri Lanka under the country’s former president is that it had become a “one-issue relationship,” said Teresita Schaffer, a former U.S. ambassador to Sri Lanka who is now a senior fellow at the Brookings Institution, a Washington policy research group.

“The issue was war crimes — human rights,” she said.

In February, the U.N. agreed to a six-month delay in publishing a report on alleged war crimes in Sri Lanka, in order to give the country’s new government an opportunity to cooperate with U.N. investigators.

Rajapaksa’s administration was accused of widespread human rights violations during the final phase of a civil war against Tamil Tiger rebels, who waged a 30-year battle for an independent Tamil state. Investigators estimate that tens of thousands of Tamil civilians were killed shortly before the conflict ended in 2009.

Schaffer said she supported the decision to delay the U.N. report. “This had become such a radioactive subject. It had become the greatest way of shutting off the conversation that we wanted to have,” she said.

During his trip, Kerry will meet with members of the Tamil National Alliance, elected officials who represent many of the country’s ethnic Tamils. He also will attend a celebration for the Buddhist holiday of Vesak, a major holiday in Sri Lanka.

“Effectively, what Secretary Kerry is doing is making himself part of the process of creating a new kind of relationship with Sri Lanka,” said Schaffer.

A senior State Department official said the U.S. wants to be “as helpful as possible” in supporting Sri Lanka’s effort to fulfill its goals of peace and reconciliation, VoA reports.

Home » Kerry hopes to reset US relations with Sri Lanka