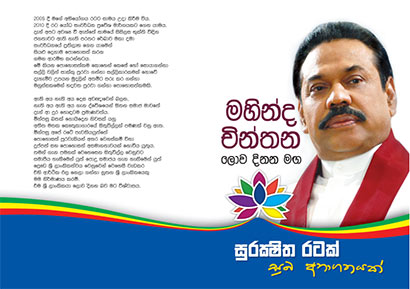 Assuring that all communities would be treated alike regardless of ethnicity, religion or language, President Mahinda Rajapaksa yesterday reiterated his commitment to Sri Lanka’s unitary status.

President Rajapaksa pledged that no one would be allowed to propagate separatism or destabilise the country. He gave this assurance at the launch of his manifesto for the January 8, 2015 presidential election at the BMICH.

The unitary character of the Constitution had to remain in the national interest, said the President, stressing that he wouldn’t allow the country to be subjected to an international war crimes probe under any circumstances. The President repeated his commitment to addressing accountability issues through a domestic investigative mechanism.

The proposed Constitution would be presented to parliament for its approval before being subjected to a referendum, the President said.

The President said that electoral system comprising a mixture of first- past-the-post and proportional representation would be introduced to ensure a stable government, strong opposition and representation for minorities.

Commenting on post-war foreign policy, President Rajapaksa declared his intention to mend relations with foreign governments that had been pushing for international war crimes probe targeting Sri Lanka. He the government wanted friendly relations with those who had backed Sri Lanka’s war against terrorism as well as those seeking to haul Sri Lanka up before an international war crimes inquiry.

The Geneva-based United Nations Human Rights Council (UNHRC) last March adopted US-led resolution to initiate an external inquiry against Sri Lanka. The report is expected to be handed over to the next Geneva session in March 2015.

Pledging to enhance relations with India and Pakistan as well as other members of the South Asian Association for Regional Cooperation (SAARC), President Rajapaksa stressed his intention to enhance political, economic and technical cooperation with India, China, Russia and Japan.

Responding to allegations as regards waste, corruption and irregularities in the public sector in the wake of rapid development projects, President Rajapaksa pledged to establish an independent National Audit Commission to inquire into conduct of members of parliament.

The President revealed plan to ensure collective responsibility of members of the cabinet and protect confidentiality through constitutional means.
The election manifesto also reiterated President Rajapaksa’s commitment to nourish all faiths with special emphasis on Buddhism.

Among the other issues which had been dealt in the manifesto were protection of children and women and eradication of narcotics. In accordance with the manifesto, a special mechanism would be established to pave the way for women to hand over new born without killing them.

The President also assured public servants of a series of measures to improve the quality of service and to prevent interference in their work.
Commenting on post-war policies as regards the military and police, the President who is also Commander-in-Chief of the armed forces stressed that officers and men wouldn’t be demobilised unlike in other countries.

The President pointed that those who had served the country had not been demobilised at the conclusion of the conflict in May 2009.