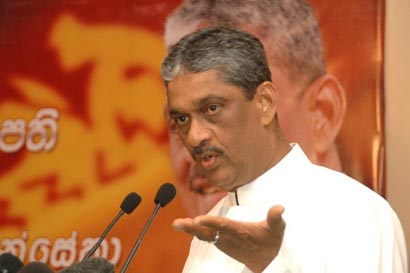 The noble task of defending sovereignty and territorial integrity of the Motherland he has undertaken cannot be defeated by an army coup or any other conspiracy says apolitical Common Candidate Gen. Sarath Fonseka. He said this at the final press conference he held before the presidential election. Leader of UNF Ranil Wickremasinghe, Leader of the JVP Somawansa Amarasinghe, Leader of the Western People’s Front Mano Ganeshan, Mr. Sathasivam Kanagaratnam of TNA and a large number of journalists participated at the event held at Jaik Hilton Hotel in Colombo today (23rd).

Gen. Fonseka addressing the media said, “A journalist asked me what I would do if a military coup is carried out on the 27th to prevent my victory. I am confident regarding my victory at the presidential election. I told you earlier that we have already won the postal votes. I am confident that the Army would not engage in any illegal move. The senior officers in the Army have connections with us. If such a thing is attempted it would boomerang on the initiators. The Army would go against them.

When the police and the CID were asked to remand my son-in-law those officers had said they could not do it. They had said they would leave their uniforms and go home. Hence, the Army and other services would act against any conspiracy. They have confidence in us.

The government accuses me of having various secret agreements. I have no agreement with anybody. There is only an understanding on a policy. The only policy I have with people in the South or the North is the creation of a country where all people can live in harmony, a country that marches forward towards development, that engages in transparent politics, that cherishes democracy, a country where there is no president full of wrath or a despot, where everyone could live justly without fear or suspicion.

We respect the sovereignty and territorial integrity of this country. We would never allow the country to be divided or broken into pieces. We would not allow any injustice to any citizen of the country. We dedicate ourselves to protect all communities, religions and march forward as a single Sri Lankan Nation.”

The Leader of the JVP Somawansa Amarasinghe addressing the media said, “We would never take measures to bring to power a king or a queen. It is the same here as well. What we are engaged is to take measures to protect democracy in the country.

The Leader of the UNP Ranil Wickremasinghe said, “People in this country would vote on the 26th for a believable change. After that you will meet President Sarath Fonseka.

The Leader of Western People’s Front Mano Ganeshan said, “I came to Colombo from Vavuniya this morning. The condition in IDP camps is very critical. There are about 35,000 voters still in IDP camps. There are no facilities in the camps despite the government telling the people in the South that they have provided all facilities to these people. However, there are large banners and cutouts of Mr. Mahinda Rajapakse in the camps. There are no banners or posters of our campaign. There is a one man show in the camps.

Rizad Badurdeen and Douglas Devananda have threatened these IDPs. They live in fear. These people need a change. We are prepared to provide facilities for these people. The people in the North have expressed unofficially their support to General Fonseka. Hence, the government is scared now. We have information that the government is preparing to unleash terror to rig votes. We call upon the Commissioner of Elections to cancel the voting in any center if any election violation is carried out.