President participates in religious observances in memory of SLFP stalwarts 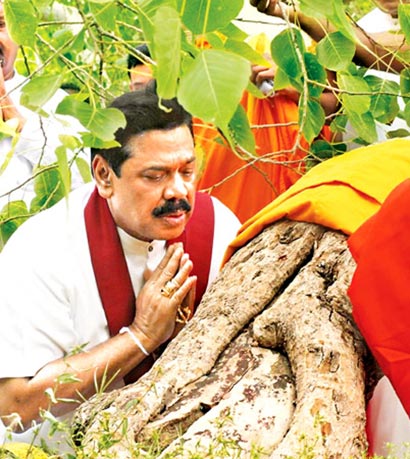 President Mahinda Rajapaksa participated in special religious observances at the Jaya Sri Maha Bodhi and Ruwanweli Seya in Anuradhapura yesterday in memory of Prime Ministers SWRD Bandaranaike and Sirimavo Bandaranaike and other former SLFP stalwarts including Ministers Maithripala Senanayake and K B Ratnayake.

Ven Pallegama Hemarathana Thera delivering an anusasana said Prime Minister SWRD Bandaranaike spearheaded the establishment of the SLFP while Sirimavo Bandaranaike as the world’s first woman Prime Minister, made a great contribution towards carrying forward the party to greater height.

Maithripala Senanayake and K B Ratnayake were great sons of Rajarata who rendered a great service to the SLFP and the country in general, the Thera said.

President Mahinda Rajapaksa had proved his sense of gratitude by participating in religious observances to commemorate those past political leaders, he said. It is a blessing of the country to be governed by a leader in the calibre of President Rajapaksa who had great qualities of humanism and gratitude, the Prelate said. “The greatest tribute we could pay Prime Minister SWRD Bandaranaike is to carry forward the policies enunciated by him. The President is committed towards doing it,” he said.