Prince who danced with the devil 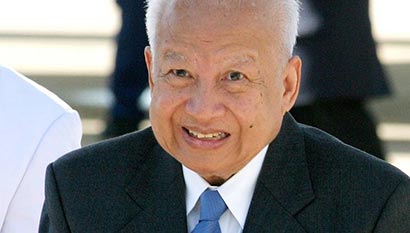 Cambodia’s Prince Norodom Sihanouk, who died of heart failure on Monday in Beijing at the age of 89, acted for 71 of those years as though he were centre stage of a world drama.

And he was, in a manner of speaking, because that drama’s larger themes included the developing world’s struggle against western colonialism, the great ideological clash of the Cold War between the United States and the erstwhile Soviet Union, the rise of non-alignment, and the emergence of China and India as global powers.

For many of those years, Sihanouk shared that stage with other Asian players such as Jawaharlal Nehru, Zhou Enlai of China, U Thant of Burma, and Ho Chi Minh and Pham Van Dong of Vietnam.

He was the last of those leaders, and his death ends an era that began in 1941 — when Sihanouk became Cambodia’s monarch — and featured figures whose legacies endure on the world stage. For Nehru, there was the legacy of non-alignment, of a belief that science and technology would help ameliorate the poverty of his nation and other former colonies. Zhou, as Prime Minister, helped temper the ideological excesses of Mao Zedong, and his legacy of moderation later found its way into the playbooks of China’s contemporary stewards who embraced Communism and capitalism simultaneously.

U Thant is remembered for his attempts — albeit ultimately ineffective — to keep the United Nations from being unduly influenced by the U.S. and the USSR. Ho Chi Minh and Pham Van Dong, then of North Vietnam, fought the good fight against French colonialism, and then extended that fight against the American presence in South Vietnam. But what was Sihanouk’s legacy? After he became monarch again in the 1970s, and up till his death, he floundered in the shadow of Prime Minister Hun Sen, who dominated the Cambodian scene (and still does). Compared to his contemporaries, then, Sihanouk was not a major actor but a bit player in regional politics who seemed out of his depth on international issues.

To a large extent, that was inevitable. Cambodia’s population is 14 million — nowhere near that of the nations of his peers. He is still resented by many in Cambodia for his support of Pol Pot, the despot who ordered the death of nearly two million Cambodians. Sihanouk paid a heavy price personally for his Faustian pact: Pol Pot’s Khmer Rouge regime killed five of his children and 14 grandchildren, even as Sihanouk remained as figurehead. In view of this ugly collaboration, it’s mystifying that virtually every home in Cambodia today displays a picture of Sihanouk. His picture, in fact, had adorned Cambodian homes since 1941, when he was selected by France to be a titular — but powerless — king to succeed his uncle, Sisowath Monivong. The French were in for a surprise: Sihanouk, in an early display of the ability to shift allegiances that was to characterise his relationship with the United States and China, started clamouring for independence. The French granted it in 1953 — around the same that their rule in neighbouring Vietnam was being challenged by Ho Chi Minh, and just after Sihanouk returned to Cambodia from a self-imposed exile in Thailand.

Sihanouk devoted the years after independence to economic development of his resource-rich but impoverished country. But economics was almost always trumped by politics. He skilfully played the French against the United States; from the latter, Cambodia received nearly $100 million in supplies and equipment, in addition to support for Sihanouk’s military. (That aid was discontinued in 1963, as the Vietnam War began to heat up, drawing Cambodia into a larger Indochina conflict that pitted the U.S. against indigenous Communist forces.)

Sihanouk said during that time that he did not wish Cambodia to be allied with either the Americans or North Vietnam. Privately he averred that he was, in effect, practicing the non-alignment preached by his friend Nehru. Publicly, he held that Cambodia’s French traditions were incompatible with U.S. military doctrine and world perspective, which was to contain Communism.

Even as Sihanouk became increasingly uneasy about North Vietnam’s military ambitions, Cambodia was being wracked by internal agitation, with reports of bloodshed caused by Sihanouk’s forces as they fought guerrillas affiliated to the antimonarchist Khmer Serei. (Much later, Western scholars said that during this period Sihanouk reportedly executed more than 1,000 men and women suspected of being members of Khmer Serei.)

Clearly, the domestic situation in Cambodia was becoming untenable. Sihanouk accused South Vietnam of making a land grab in border regions. He established diplomatic relations with China in the belief that it would influence North Vietnam to be less hostile to him.

In early 1970, Sihanouk was deposed by Lon Nol, who immediately pardoned some 500 political prisoners said to be affiliated with Khmer Serei. Sihanouk always held that Khmer Serei was secretly backed by the U.S. (which, of course, it was). Just before he was deposed, Sihanouk had gone to France for medical treatment; in his absence, the Cambodian Parliament voted to kick him out, and the U.S.-backed Lon Nol — who had been Prime Minister — became the country’s new leader, who promised a new era of economic growth and political stability.

But peace and prosperity scarcely came to Cambodia. The region was too engulfed by conflict to permit that. The U.S. expanded its bombing of North Vietnam to include Cambodia on the grounds that it was being used as a conduit for Communist guerrillas headed toward South Vietnam. From his exile in Beijing, meanwhile, Sihanouk announced the formation of Front Uni National du Kampuchea — more popularly known as FUNK — that would serve as an umbrella group for organisations opposed to Lon Nol. Lon Nol himself had been deposed by Pol Pot, a former schoolteacher whom Sihanouk had befriended and encouraged to create a guerrilla unit known as Khmer Rouge. The ultra-Maoist Khmer Rouge asked Sihanouk to return to his homeland in 1975 and made him a figurehead king.

The Khmer Rouge regime collapsed in 1979. Sihanouk, perhaps out of misguided loyalty, continued to support the guerrillas as they were driven into the dense forests of Cambodia and rallied against the Communists of Vietnam and the new Cambodian regime of Heng Samrin and, later, Hun Sen.

Despite such tension, Sihanouk continued to lead a personally varied life, producing movies and composing music. But finally he had had enough, and in January 2004, he went into exile in North Korea and then moved to Beijing. Wracked by cancer, diabetes and heart disease, Sihanouk’s last years were not pleasant. But those who visited him said that he was always cheerful.

Home » Prince who danced with the devil