Right of Reply: The truth about the People of Keppapilavu in Mullaitivu 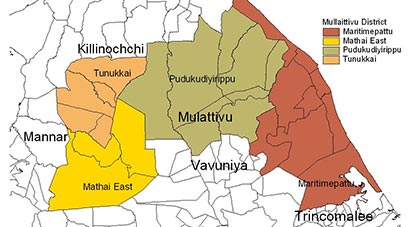 Can someone please say how worse can life be for people who were living for 30 years in cadjan huts under LTTE rule engulfed in immeasurable number of fears , now given 40 perches of land for each family, 6 months of dry rations, 12 roofing sheets per family, 8 cement bags, non-food relief items that include mosquito nets, plastic mats, kitchen sets….even coconut scrappers and a total shelter grant of Rs25,000 and eventually a brick house that is 550sq.ft with 2 bedrooms/a living room/bathroom and kitchen?

Can Elijah no one demanded LTTE to leave the Tamil civilians alone? Did Elijah and others demand that the LTTE should not demand Tamils to sacrifice a child each to the LTTE to turn into LTTE killers? Can Elijah explain what kind of democracy prevailed in 30 years of LTTE rule? In comparison what does Elijah and the likes find so grotesque in the freedom experienced by the people in the North now as compared to how the people lived under LTTE rule? Is Elijah implying that Tamil people lived wonderfully under the LTTE far better than now? 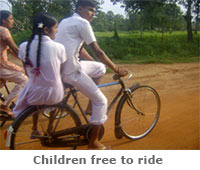 However, last month when I visited these areas there were certainly no screams of anguish except children gleefully cycling on the 100 bikes gifted to them and mothers happily taking home utensils gifted to them – the scenario was nothing that Elijah’s article attempts to convey and a group of 25 visitors from overseas donating goodies to these people would vouch for this as well.

It is just as well that this writer mentions “ethnic conflict” because – the close to 300,000 odd people that the Sri Lankan military helped rescue were all crying out for food and medical assistance back in May 2009. Now if their “savior” the LTTE had been looking after “their people” from the USD300m annual profits can “Elijah” please explain why these people were living in cadjan huts for 30 years – why not a single road was made, not a single school was built except LTTE training camps disguised as “orphanages” in the middle of the Mullaitivu jungles and a swimming pool that was 86ft long, 36ft wide and 22ft deep, floodlit, with 6 changing rooms and that too in the thick jungles – if Elijah has not seen this here’s a picture!

Mullaitivu is a district with an area of 2,516.9 sq.km – its strategic interest to a sovereign nation is nothing any Government should need to afford excuses for or explain why it would place military installations to secure that security interest.

The 165 families newly housed in the Kepapilavu model village remains in the corner of Kepapilavu bordering Seeniyamottai. There is nothing that hampers any of their daily requirement in terms of school, health facilities or livelihood – everything is within range. So what is this fuss except to use that as an excuse to create an issue, internationalize it and to demand the security forces to move out of this strategic location! We now know the drill.

The current wave of negative media coverage portraying the “woes” of civilians echoes the same strategy used in attempting to remove the Mullikulam naval camp with an all out international cry led by TNA over the plight of 81 non-Hindu families. The gameplan was clear – use media to create pressures to remove Sri Lanka’s security bases from coastal areas and for whose advantage would this be? Your guess is as good as mine!

Having spoken to numerous people who were conversant in Sinhala, there was nothing to remotely convey the feeling of displeasure with the military when the question was directly posed as to how satisfied the people are with the military. In my presence a request for a sewing machine was immediately attended to and that does not show signs of a military “intimidating” civilian life – it showed a new bond and how people were not afraid to make a request!

Far more than the bonding between the older generation was the manner in which the children were moving with the armed forces. The communication factor has helped to a great extent and with a growing number of military personnel conversing in Tamil it is ideal for the children too to learn Sinhala. This is in deed good news for the future especially when attempts are afoot to draw youth back into an armed struggle by the very forces that created Sri Lanka’s terror helped by their local stooge the TNA. Thankfully the people of Kepapilavu have realized the lies of the political party and TNA has failed to make inroads into the area or amongst the people of this model village.

Yet, with these calls to remove Sri Lanka’s military from coastal belts it is time Sri Lankan authorities realize who their enemies are.

If its denial of rights that Elijah is referring to he or she may like to explain what rights the Tamil people had under LTTE rule – abducting children as young as 10years, denying children their fundamental rights to education, encouraging religious conversions, subjecting Tamil people to passes issued by LTTE’s Transport Monitoring Division (TMD), restricting movement of Tamil people, forceful payments to LTTE checkpoints, unpaid labor, using Tamils as human shields, confiscating Tamil assets, assassinating over 250 Tamil learned men – Can Elijah please explain what “dignity” the LTTE gave the Tamil people to promote the idea that life of these Tamils were far better under LTTE rule!

Keeping to the theme of rights the writer quotes the Constitution of Sri Lanka “Any citizen of Sri Lanka has the inalienable right to acquire land in any part of the country, in accordance with its laws and regulations, and reside in any area of his/her choice without any restrictions or limitations imposed in any manner whatsoever” – with Sinhalese the 3rd place in terms of population in Colombo it shows how well Tamils and Muslims have used this “inalienable” right and prompts Sinhalese to use these same rights to purchase property and land in the north and east of Sri Lanka to work and live there. It’s the perfect way to move forward with reconciliation.

As for threats – What threats do Tamils face in the present that are exclusive to them? They are all traveling throughout the country without fear, they visit their relatives without having to pay LTTE at checkpoints or handover their jewelery, they purchase property and land without fear and the only issue that has resurfaced which the LTTE kept in check was the Tamil caste issue. With the caste factor resurfacing we again see a host of conflicts all associated with the caste factor and it is nothing that the Sinhalese, the military or the Government can be blamed for. It is something the Tamil people need to sort out amongst themselves.

The Government may be at fault for a lot of things but its manner of resettling and developing the North and the East is nothing that deserves humiliation and fabrications. Visiting these areas once the haunts of the LTTE it is not hard to feel angered with the LTTE for letting their own people down for 30 odd years on the pretext of being their savior. People need to visit these areas to see for themselves how LTTE had fooled the Tamil people and the lies that the LTTE supporters contributed towards as well.

2 Responses to Right of Reply: The truth about the People of Keppapilavu in Mullaitivu

Home » Right of Reply: The truth about the People of Keppapilavu in Mullaitivu