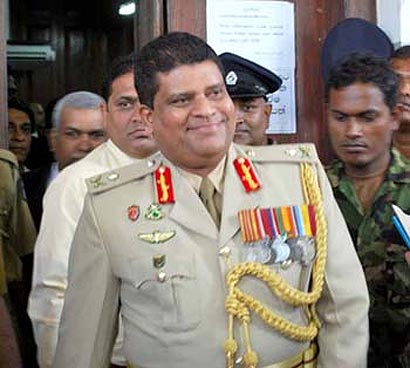 Some of the injured persons who surrendered were dispatched to the Colombo National Hospital for immediate treatment, Major General Silva, 46, said. He said that Defence Secretary Gotabhaya Rajapaksa had given clear instructions to the Army who was conducting the humanitarian operation in the Vanni District, to receive the LTTE cadres and the civilians who surrendered without harming them.

There should not be any casualties, the Defence Secretary had told Army officials in the Vanni District.

Major General Shavendra Silva, who is at present the Deputy Permanent Representative of Sri Lanka to the United Nations, examined by Deputy Solicitor General Wasantha Navaratne Bandara, who is leading the prosecuting team, said that the Army who was conducting the Humanitarian operation in the Vanni district received the LTTE cadres and the civilians who surrendered to the Army, during the last few hours of the war, with bottles of water and they were later given food.

The LTTE leadership surrendered in batches. They were carrying not only white flags but also black flags and white clothes and raising their hands before passing the soldiers, the Major General added.

Examined at length about the operations conducted during the war, Major General Shavendra Silva said there were no incidents reported in connection with violation of human rights.

All operations conducted during the war was very successful. There were no problems in evacuating the civilians from the LTTE terrorist areas, he said. The Vanni operation was concluded on a very successful note on May 18, 2009.

Even President Mahinda Rajapaksa who returned to Sri Lanka after an official tour from China congratulated the Armed Forces at the mid-night for the victory.

Major General Shavendra Silva joined the Army on March 5, 1984 as a young Cadet officer and was later attached to the Eight Brigade under late Major General Wijaya Wimalaratne.

Major General Shavendra Silva explained to Court about his army carrier and said that he had been in the forefront of several operations conducted during the war including Rivirasa, Jaya Sikuru Kilinochchi, Pooneryn and in the Jaffna Peninsular. At the outset, Sunday Leader Editor Frederica Jansz was re examined by the Deputy Solicitor General and she was released from the proceedings.

Sarath Fonseka earlier pleaded not guilty to the three charges preferred against him for making a false statement to The Sunday Leader Senior Journalist Frederica Jansz that Defence Secretary Gotabhaya Rajapaksa had told Brig Shavendra Silva to eliminate the LTTE cadres who come with a white flag to surrender during the war.

Sarath Fonseka is charged on three counts under the Criminal Procedure Code and under the Emergency Regulations Sections 28 and 29.