Sri Lanka attacks: Could this photo be evidence of failed mission by bomber with UK links? 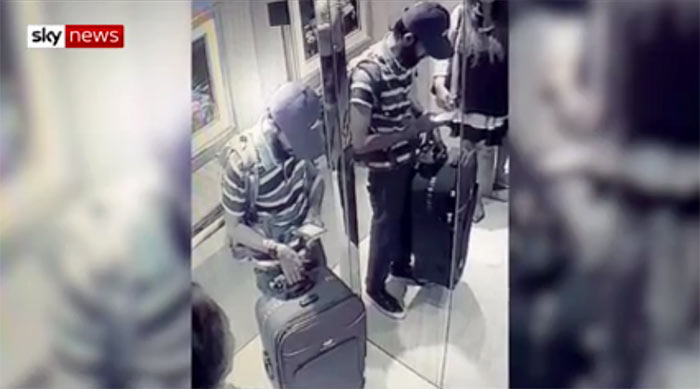 A photograph has been obtained by Sky News which, according to a security source, is of the suspected Sri Lanka suicide bomber who studied in Britain.

Abdul Lathief Jameel Mohamed, 36, is bearded with a rucksack, thought to contain explosives, and a suitcase at the Taj hotel in Colombo on Easter Sunday.

He is wearing a baseball cap just like two other suspected bombers pictured on CCTV footage before they struck the Shangri-La hotel.

Seven other bombers exploded themselves in a coordinated strike against churches and hotels on Easter Sunday.

Only he didn’t, and instead blew himself up hours later at a low-grade guesthouse on the outskirts of the city.

Security officials say something went wrong with the detonation charge so he left the five-star hotel frustrated.

One source said he changed his clothes, swapping a striped shirt for a white, short sleeved one.

He then caught a rickshaw to travel to the Dehiwala area where he checked into the Tropical Inn at around 9.30am, just after the mass bombings.

Sumith Vijelal, the manager of the guesthouse, said the driver of the rickshaw was a friend of his and claimed he brought Mohamed to him as a favour to find him a guest.

He revealed this driver has since been taken in for questioning by the police but claimed he thought he would be released soon.

Mohamed asked for a room with a lock, before dumping his bags and leaving, according to Mr Vijelal.

Sources said he visited a local mosque. Another photograph is said by a security source to be of him at the mosque, wearing a white shirt.

He then returned to the hotel at around 1.30pm, went into his room and about eight minutes later, blew himself up, the manager said.

The blast killed a man and woman staying in a room next door.

It reduced the one-storey building to rubble.

Mohamed – who has also been pictured in an ID photo – was already under police monitoring.

He has two passports and travelled widely, possibly even spending time in Syria.

Sky News has obtained exclusive details of some of his foreign travel when he may have been radicalised.

The suspect made his first known trip to the UK on 1 January 2006 to study aeronautical engineering at Kingston University.

He then returned to Sri Lanka via the Maldives in September the following year.

He went back to Britain in 2008. Security officials are looking into his movements and any extremist links.

Over the next four years he jumped between Malaysia, Singapore and Sri Lanka. Islamic State is known to have a presence in Malaysia.

It has been revealed that he did a postgraduate degree in Australia at some point. He is also reported to be married and with children.

When and how he became radicalised is under investigation as well as why he chose to bring terror to an obscure street on the outskirts of Colombo.

Home » Sri Lanka attacks: Could this photo be evidence of failed mission by bomber with UK links?