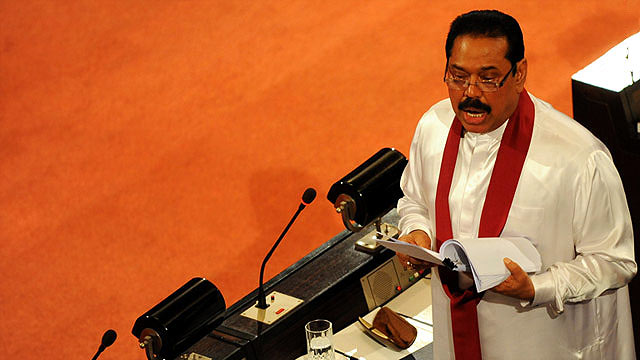 Sri Lanka Prime Minister Mahinda Rajapaksa said the 19th Amendment to the Constitution should be implemented with essential and timely amendments to establish socio economic and political stability to address the issues of the people.

Making a statement in Parliament on the existing economic crisis yesterday, he said the government admits the people in the country are facing many difficulties.He added that the LPG, fuel and electricity crisis are only the visible issues and there are many untold issues arising from those issues. He also added that the country is facing a crisis where all have to get together to find a way out.”This is not a time to fish in the troubled waters to gain petty political gains,” the Prime Minister said.

“Fiscal management is very important to overcome this situation,” the Premier said “Hence internationally recognised economic experts have been appointed to high ranking positions. Additionally we have already initiated dialogues with the IMF, World Bank, the Asian Development Bank and other related institutions.We are getting constructive responses. In addition, friendly countries are assisting us to get out of this situation.”

He said the Finance Minister, Finance Ministry Secretary and the Central Bank Governor are committed to bring this issue back to normal. Our responsibility at this moment is to find a lasting solution for this issue while applying short term measures to relieve the people’s difficulties. “Hence the opposition should make an intervention in this endeavour rather than resuming protests,” the Premier said. “I invited protestors at the Galle Face to discussions to get their valuable views.”

He said further that in all these endeavours socio-economic and political stability is required which could be brought about by way of a new constitution.

He added as an initial step I believe the 19th Amendment to the Constitution should be implemented democratically with essential and timely amendments.

He added that it should go forward to bring about a new constitution. He added that the government expects the assistance of all political Parties.