States should not be deprived of weapons – Shavendra 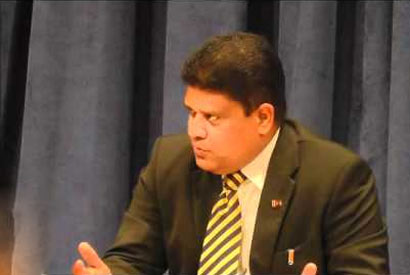 Ambassador Major General Shavendra Silva, Charge d’Affaires of the Permanent Mission of Sri Lanka to the United Nations, emphasized that action taken by the UN and its member states to curb proliferation of small arms and light weapons shouldn’t affect right of governments to acquire weapons.

Ambassador Silva was addressing the 2nd UN Conference to Review Progress made In the Implementation of the Programme of Action to Prevent, Combat and Eradicate the Illicit Trade in Small Arms and Light Weapons in All its Aspects, on 27 and 28 August.

Sri Lanka’s statement at the 1st  UN Conference to Review Progress made In the Implementation of the Programme of Action to Prevent, Combat and Eradicate the Illicit Trade in Small Arms and Light Weapons in All its Aspects, was delivered by Defence Secretary Gotabhaya Rajapaksha in 2006.

The former General Officer Commanding (GoC) of army’s 58 Division said: “We support international measures to address the issue of proliferation of Small Arms and Light Weapons.  At the same time, we believe it is important to ensure that any measures taken by the UN and its Member States to curb proliferation of small arms and light weapons do not affect the rights of States to legally procure and hold weapons for its self-defense and for the safety of its citizens. It is our view that international measures to curb proliferation should particularly focus on combating illegal trade in Small Arms and Light Weapons. In this regard, countries that produce such weapons have a greater responsibility to monitor and control their disbursement.”

The following is Ambassador Silva’s statement: “Today, more than at any other time, preventing, combating and eradicating the illicit trade in Small Arms and Light Weapons is a matter which requires concerted efforts by all nations. The convening of the 2nd Review Conference of the UN Programme of Action is therefore, timely.  The amassing and spread of Small Arms and Light Weapons continue to fuel conflicts and cause untold suffering in many regions of the world.

Sri Lanka is a country which has experienced, first hand, the destruction that can be caused by the illicit trade in such weapons. For a period of nearly 30 years, the Liberation Tigers of Tamil Eelam (LTTE) a terrorist outfit, which unlawfully occupied areas in the North and East of Sri Lanka, made ample use of the easy access to small arms and light weapons globally to procure and use such weapons with lethal repercussions on a democratically elected Government and its people.

In the post conflict phase, Sri Lanka is beginning to uncover not only the extensive overseas networks that have facilitated the illicit transfer of Small Arms and Light Weapons but also the extensive arsenal that terrorists had been able to acquire.  The massive stockpile of weapons which were recovered from the terrorists during and following the end of the conflict bears testimony to the ease with which terrorists could procure such weapons globally and reiterates the urgent need to eliminate this illicit trade.  With the eradication of terrorism, efforts are being taken to make a fresh analysis on small arms and light weapons particularly in the areas that were unlawfully occupied by terrorists. Action is being envisaged to take steps nationwide to recover illicit weaponry and ammunition.

As a signatory to the UN Programme of Action to Combat the Proliferation of Illicit Small Arms and Lights Weapons in All its Aspects (UNPoA) of 2001 Sri Lanka established a ‘National Commission Against the Proliferation of Illicit Small Arms’ (NCAPISA) to deal with the proliferation of such arms in Sri Lanka. The Commission, with support from a variety of actors such as the UN and the Government of Japan, has taken steps, since establishment, to make a comprehensive assessment of the problem in the country. By 2009, the issue of licenses for civilians to carry small arms was controlled through an electronic licensing database, a project which was successfully completed with the support of the Government of Japan.  Licensing and restrictions on the caliber of guns available to the civilians help to curb the proliferation of small arms. Steps are also being taken to strengthen the work of the National Commission following the end of the conflict. The main objective of the Commission at present is to establish a national data base on the civilian use of Small Arms and Light Weapons in the country.

Sri Lanka believes that developing countries need to be provided, upon their request, with assistance for capacity building in managing this issue.

Discussions at the First Review Conference in 2006, even though delegations were unable to agree on an outcome document, highlighted the issue of illicit trade in Small Arms and Light Weapons and focused attention on the implementation of the Programme of Action.

This Review Conference is a useful opportunity for countries to expand the scope of action towards preventing small arms and ammunition ending up in the wrong hands. Urgent and meaningful action on this critical issue is essential to ensure international and regional peace and security.

Home » States should not be deprived of weapons – Shavendra