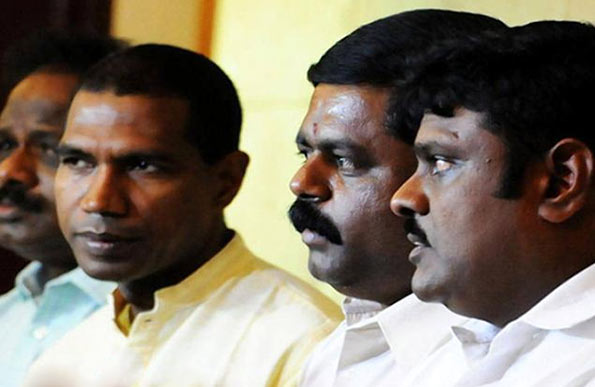 An atmosphere conducive to find a permanent political solution to the Sri Lankan Tamil issue is emerging now and it is the moral responsibility of the Tamil diaspora to join in reconstruction efforts, according to a group of Tamil MPs from the island nation.

Addressing a press conference here on Friday, Sivagnanam Siritharan, Kilinochi MP, said that with the coming together of two major political parties and the efforts of several nations, including India, pointed to the emergence of an opportunity to find a permanent political solution to the Sri Lankan Tamil issue.

Tamils living in the North and East of Sri Lanka were not politically empowered now to bring about economic transformation in the war-torn region and look up to Tamils living elsewhere, especially to Tamil Nadu, for help in reconstruction, he said. An estimated 90,000 war widows were living in this region without a clue of how to bring up their children. The government did not treat them on a par with widows of Sri Lankan Army personnel, he added.

Regretting that most of the promises made in Sri Lankan Parliament on rehabilitation of Tamils were yet to be translated into action, he said the housing schemes of India and other countries, however, had reached the intended beneficiaries.

Charles Nirmalanathan, Mannar MP, said that most of the war widows lived in the Vanni region and about 1.8 lakh children faced an uncertain future.

It was the moral responsibility of the Tamil diaspora to help in educating these children and empower them to earn a livelihood. Most of them were attending local schools and their families did not have the wherewithal to assist them in pursuing higher education.

Velukumar, Kandy MP, felt that the predicament of plantation Tamils was not properly understood in Tamil Nadu as the Sri Lankan Tamil issue was restricted to the North and East.

The plantation workers, who were originally from Tamil Nadu, faced as much discrimination and oppression as their counterparts in the North and East and hence a political solution to the Tamil issue should also include these people, he said. Only education, Mr. Velukumar said, would deliver the children of plantation workers from bondage.